Earlier this year, we listed the 20 best albums of 2009’s first three months – from Animal Collective’s Merriweather Post Pavilion to Telepathe’s Dance Mother, stopping off at Humcrush and Micachu along the way. Then came the Second Quarter Report, our top 20 from April to June, featuring Dirty Projectors, .snd, Blank Dogs and the […] 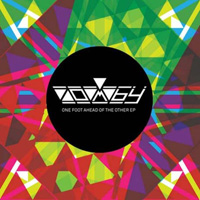 Earlier this year, we listed the 20 best albums of 2009’s first three months – from Animal Collective’s Merriweather Post Pavilion to Telepathe’s Dance Mother, stopping off at Humcrush and Micachu along the way.

Then came the Second Quarter Report, our top 20 from April to June, featuring Dirty Projectors, .snd, Blank Dogs and the rest. And now it’s that time again – you should know the format by now; FACT’s 20 best albums from July to September, listed alphabetically. Cold Cave, Zomby, Discovery, The xx and more are along for the ride.

"This music is the diametric opposite end of the wired-on-skunk spectrum from the whirling fairground kinetics, supersaturated colours and videogame hyperactivity of Rustie, Joker and Zomby: it’s the sound of oppression, depression, paranoia and relentless plod, of burnt-out synapses and crackling, inhuman signals being pointlessly transmitted across barren, lifeless landscapes. And it’s brilliant."

"A mess of broken synths and monologues about the depths of Hell, Cremations‘ [Cold Cave’s last album] aesthetic owed little to synth-pop’s lineage and much to the work of Prurient, Geisha and other such purveyors of white noise-drenched metal, and is still one of the most compelling, obsession-encouraging records to come out this year. And how does Eisold follow it? With an album that sounds like New Order."

(ITALIANS DO IT BETTER)

Italians Do It Better’s Johnny Jewel (he of Chromatics and Glass Candy) journeys to Montreal, hooks up with vocalist Megan Louise and drummer Nat Walker, and makes a full-length album of timeless sounding ballroom pop that fans of Nite Jewel or the Fiery Furnaces should lose their shit to. Sound as a pound. Desire myspace

"If nothing else, LP should be admired for the way it eschews most modern indie (and especially side projects)’s penchant for flitting around music’s margins – touching on greatness, but never quite going for it – and instead aims straight for the jugular, every chance it gets."

"Landscapes bears traces of the acid-fried kosmische rock of Ash Ra Tempel, the shimmering Factory Balearica of Crispy Ambulance and The Durutti Column, the scuzzy lo-fi grunge of early Pavement and Sebadoh, and, particularly on ‘Deck Observatory’ and ‘Seagull’s Flight’, the kind of hauntological, arpeggiated electronica espoused by Belbury Poly and Smackos. It’s really quite a trip."

"I’m Going Away‘s approach takes a while to get used to, but ultimately we’re talking about a pair of songwriters who’re good enough to pull off these sorts of blues-rock standards – and while it’s easy to miss the eccentricity of their past LPs, how many other bands could trade in half the stuff that defined them and still pull out songs as memorable as ‘Keep Me In The Dark’?"

"So classic does The Visitor sound, you’re naturally inclined to assume that there are lots of records like it. Then you actually think about it, and realise there are none – none at all. The Visitor is a lone-standing triumph, not just of composition and performance (every note is written and played by O’Rourke) – but of craft as well."

Though a frequent contributor to labels like Bunker and CremeOrganization, Hague-based synth-savant Danny Wolfers saves his best andfreakiest work for his own Strange Life imprint, adopting a bewilderingarray of guises for a staggering run of CD-R albums with bizarrebackstories. The latest is Amiga Railroad Adventures, a tribute to theage of "Amiga computing cosyness" and it’s one of Wolfers’ very best.Though the influence of his beloved Chicago house is evident on acouple of tracks, in the main this is streamlined, Kraftwerkiantechno-pop: bassy as fuck, soaked in tape-hiss and, for all its retrogrounding, somehow still bewitchingly futuristic.

SADLY, THE FUTURE IS NOT…

While the Caretaker [Leyland Kirby’s more famous alter-ego] albums were ambiguously melancholic, Sadly, The Future Is No Longer What It Was is positively suffused with sadness, a sadness bordering on anger. Track titles like ‘Not Even Nostalgia Is As Good As It Used To Be’ and ‘When Did Our Dreams And Futures Drift So Far Apart’ leave you in no doubt as to your man’s grave mindset. But he remains a romantic at heart, and for all the hurt and regret evinced in Sadly there is even more beauty to behold: stately chord progressions, spectral piano melodies and wraith-like synth loops that sound hopeful and restorative almost in spite of themselves.

SALUTE TO THE MEN OF VAUXHALL

"This is an emotive mix: there’s the utter elation with the first stirring of disco strings; the sheer joy of lost ’80s classics by Hall & Oates and The Pointer Sisters; the ‘wow, what the hell was that?’ moment when some obscure italo song pops up; by the time the Moroder-produced Donna Summer classic ‘Now I Need You’ arrives, you’ll probably have lost your mind. And that’s just Disc One."

"Confiote De Bits is perhaps excessive in length: I dare say a more judiciously compiled single CD could have done the job just as well, but it’s nice to have all these fine productions in one place. Bradock’s uncommon musicality and sense of mischief resounds in every note and every pocket of space; if you’ve ever wondered why he enjoys such hallowed status in the
ho
use community, you will no longer after hearing this."

"Remixes come courtesy of Ghosts on Tape and Brenmar, but they’re pleasant afterthoughts: the original material on show here makes for one of the year’s most enjoyable EPs, and frankly I can’t wait for the album that follows."

"The thought and loving detail that [album producer, Johan] Agebjörn has put into his arrangements consistently repays close attention. Combine that with some pop tunes the proverbial milkman could whistle and a cover of Nicolas Makelberge’s thought-provoking ballad ‘Dying in Africa’ and you have a pleasure well worth the guilt."

"Silk Flowers aren’t self-consciously retro but they are nostalgic: the band look to the past to find inspiration for the future, and while they tread a fine line throughout the record, the originality in their song-writing ensures they stay the right side of copyist, resulting in something enjoyable and admirable."

"City Limits is a busy, but never cluttered album, which stays true to dubstep’s traditional half-step structure while flirting with signatures of other genres: ‘Quasar’s peppered breaks, techy atmospherics and bassline could have been lifted from an ambient jungle tune, while Purple Love’s naked P-Funk intro leads into the sort of soulful space ballad that Dam Funk (and granted, Joker) would be proud of."

Not out ’til next week, but still, eighteen instrumentals cherry-picked from the archives of one of grime’s most distinctive producers, collected across a pack of three 12" records, or one CD – what’s to complain about? Essential on vinyl.

I CAN HEAR THE SIRENS AGAIN

"I Can Hear the Sirens Again is one of the year’s most distinct and measured albums, and although its peaks (that Basinski-esque loop section and the folk song) are very clear and the context to them isn’t always memorable, it’s more replayable than most records of this ilk, and shouldn’t slip through the cracks like a lot of modern ambient can."

"Tummaa doesn’t quite scale the heights of The Moritz Von Oswald Trio’s Vertical Ascent, to which Ripatti contributed show-stealing live percussion, but it’s nonetheless an impressive and original achievement."

"Only the lyrics betray the band’s youth: there’s little depth beyond basic love-gone-sour poesy ("Did I say something that was wrong/Can I make it better with the lights turned on?"). But sometimes the simplest means have the most profound resonance, and if nothing else, this album is a testament to that very fact."

ONE FOOT AHEAD OF THE OTHER EP

"Like the Dylan of Bringing it All Back Home, Zomby has become an artist in exile; one operating at a much more rarified artistic level than his peers."