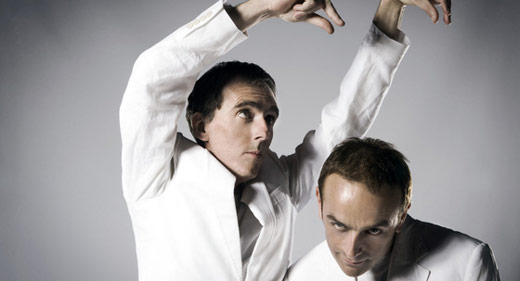 Underworld have revealed that they’re working on new material with Brian Eno.

Karl Hyde and Rick Smith, who played a DJ set ahead of Kraftwerk’s headline show at Bestival on Saturday, have apparently amassed three albums’ worth of new music.

Hyde told BBC 6 Music, "We actually managed to get into the studio this week and a little bit last week too, which is unbelievable.

"It’s a miracle. Normally bits of our kit are strewn all over the world, or we’ve got enough time to get back, unpack a case, scratch, and then get back on a plane again."

The band have been recording with Eno in Australia, and currently don’t see the fruits of their collaboration being released in traditional album format.

"Right now we don’t want to think about being tied down to an album. Somehow that seems like such an old-fashioned concept.

"There’s more energy in making tracks, and putting tracks out, and then reacting to that, and then moving on to the next track. There seems to us a feeling of how we used to put 12-inch singles out."