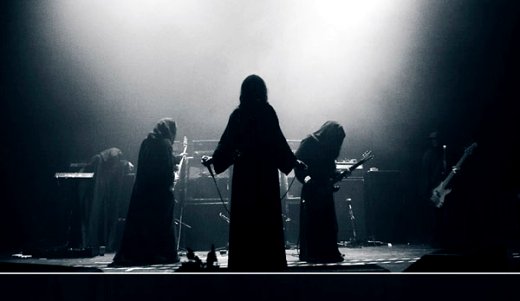 It’s not the first time the band’s core members Stephen O’Malley and Greg Anderson have played here for that long – they performed some shows as the Grimm Robes duo earlier this year, including at Birmingham’s Supersonic Festival – but it’s the first series of shows under the Sunn O))) name, hence all the hoo-ha.

The line-up will be O’Malley and Anderson, vocalist Attila Csihar, and Steve Moore, who’s played brass with fellow droneheads Earth in the past. Support will vary throughout the tour: the Newcastle date will see the group joined by guitar assault legends Skullflower (no word if it’s just Matt Bower, or the original Skullflower line-up that reformed for a London show this year). The Manchester and Bristol dates will have Swedish electronics guru BJ Nilsen along for the ride, while the Birmingham and London shows feature Om, the stoner rock duo who just released a superb new album, God is Good.