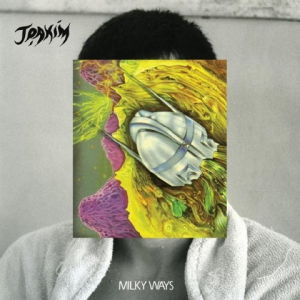 Joakim’s follow-up to the critically acclaimed Monsters & Silly Songs takes the eclectic creativity of that 2007 LP and adds a greater sense of purpose and continuity. Whereas Monsters felt like a random collection of (often great) tracks, Milky Ways feels like an album; the French producer/remixer and Tigersushi co-founder honing the modus operandi developed on his last full-length outing – live band recordings later manipulated in the studio (if it was good enough for Miles and Teo Macero…) – to produce an LP of genuine power and intrigue.

The most intriguing thing, in fact, is just how hard this rocks. The opening ‘Back to Wilderness’ stomps into the room like the bastard child of the Faust Tapes, Metal Box and Black Sabbath’s ‘Iron Man’. ‘King Kong is Dead’ on the other hand is the greatest instrumental Radiohead never wrote. And if you’ve ever wondered what Tom Petty would sound like playing with Slint and Tangerine Dream, ‘Glossy Papers’ might give you a clue.

Those turned on to Joakim by ‘Lonely Hearts’ will be pleased to know that Milky Ways also has its fair share of booty-shaking action. If ‘And Me’ presents a new twist on the kind of late ’70s cop show disco found on Harry Thumann’s ‘Underwater’ or ‘Vendetta’ by Dislocation Dance, ‘Love and Romance and a Special Person’ is something else entirely: Imagine Bob Sinclair and Stephen Hawking jamming with Polyrock on Will Powers-style self-help pop and you’re half way there (!)

Yet while reference points crop up left, right and centre (Underworld, Beck and Subway Sect are among the many names in my notes), Joakim is very much his own man. And he’s pulled off a remarkable feat: a record that should appeal equally to fans of Joy Division, J Dilla and James Murphy. One of the year’s most idiosyncratic releases and one of its best.