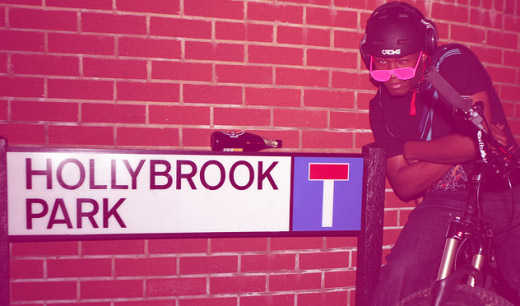 Much of the best bass-driven music to emerge over the last two years (even if we weren’t that big on this recent remix of The Heavy) has come courtesy of Joker, Gemmy and Guido, the Bristol trio who’ve contributed singles to premier UK labels Hyperdub, Punch Drunk and Planet Mu – not to mention Joker’s output on his own Kapsize label.

In an in-depth interview with Resident Advisor yesterday, Joker – the most hyped member of the three, and the one whose debut album we understand will be released first, after Gemmy’s debut for Planet Mu was pushed back – talked about what he has in the pipeline for the rest of the year and early 2010.

He’s "postponed any serious collaborations with Guido and Gemmy", stating that he "make[s] a tune  more easily with [frequent collaborator] Ginz than I do with those two because our heads are in the same place, just banging out things on the hardware and just leaving it on record, but with Gemmy and Guido, they’re still on software, and I can’t stand that shit no more."

He does however, go on to say that he plans to do a full-length collaboration with Gemmy, Guido and Ginz, but currently he’s focused on writing and recording his debut album. He reveals in the interview that it will include live favourites ‘Tron and ‘My Trance Girl’, as well as, in writer Richard Carnes’ words, a "raucous arpeggiated collaboration with drum & bass producer TC".

"There’s definitely going to be a few fucked up tracks to make a few people happy. Completely more fucked up than you’ve ever heard from me before. A few R&B-ish, grime-ish tracks…and I might put ‘Digidesign’ on there. Just a few [old] tunes that need to be on there."

Carnes goes on to state that "a 12-inch single alongside Croydon’s dubstep pin-up Skream should surface sometime next year [we’d wager this is ‘Skittles’, under the name Parma Violets], and an album with London-based halfstep producer Silkie is in the works as well. The pair are planning to travel to both Berlin and Copenhagen to produce the record, and although it will be difficult for Joker to shift all of his hardware over to mainland Europe for the sessions, one thing is for certain… The V-Synth is definitely coming with him."