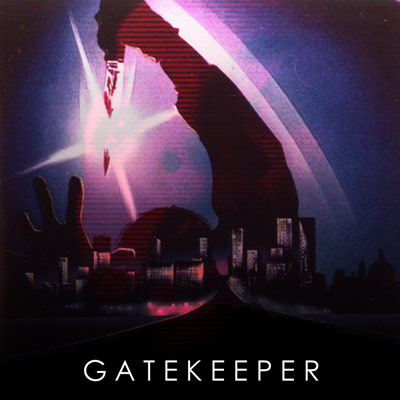 Here’s a bit of news out of the blue: Kompakt‘s Michael Mayer and Jon Berry have joined forces to found a new label called Fright – "dedicated to bringing you serial killer symphonies […] for the back alley discos of the macabre".

The inaugural release will be from Chicago’s Gatekeeper, not to be confused with the Bristol dubstepper who has previously released material on Skull Disco. The group’s analogue disco sound is inspired by the sound of their hometown as well as the oft-referenced horror-disco and soundtrack work of John Carpenter, Goblin and Claudio Simonetti. The description in the press release is rather more florid:

"Gatekeeper are truly awe inspiring conjurors of the kind of crimson splattered disco that terrified the babies of the 80s, toiling away in the basement of Smith’s Grove – Warren County Sanitarium to create sinister synth cathedral epics that perfectly evoke a spine shuddering time when we were haunted by those mysterious plastic boxes so ornately displayed in VHS rental stores that provided portals into a garish, gross, darkly glamorous celluloid world where hotel hallways were eternally aglow in green ectoplasmic matter, masked men were glimpsed briefly from bedroom windows in suburban gardens before vanishing into thin air, where seemingly innocent toys harboured horrific secrets inside their plastic prisons, and blackened alleyways were home to invisible, parallel universe bazaars run by mysterious men with pointed teeth and intense blue eyes obscured by their pyramid bamboo hats, selling a dizzying array of golden Mattel weaponry and three headed creatures in wicker cages. Towering above this deserted synthetic landscape of icy electroid charges and industrial black clatter is our God and hero, John Carpenter, his phantasmagorical visions and teachings of psychotic homecomings and monochromatic cityscapes choked by magic and menace translated by Gatekeeper into something possessed of undeniable religious power and sacrificial intensity as they expertly guide us through the twisting brain-tunnels of his world."

Right, well that’s us told. The Gatekeeper EP is entitled Optimus Maximus and consists of four new track that will be released on 12" on October 26 (just in time for Halloween y’all) and a digitally a week later on devil’s night itself (October 31). You can listen to the tracks now over at the band’s myspace. A video for the title track, directed by Tommy Boy (Telepathe, CFCF, Butthole Surfers), will appear online shortly.

20 Jazz Funk Greats are hosting a suitably schlocky Gatekeeper mix which features tracks by Vangelis, Ministry and Harold Faltermeyer. Have a listen.