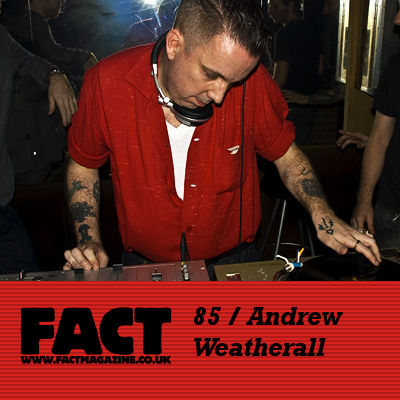 This Monday’s FACT mix comes from Andrew Weatherall, a British DJ and producer who should require no introduction.

A vital part of UK music in the late ’80s and early ’90s, Weatherall was the wry wit and leading DJ behind seminal acid house crew Boys Own, whose early remixes and productions for the likes of Primal Scream, My Bloody Valentine and Saint Etienne led the way in blending dance and rock music into blissed-out loose-limbed union, writ largest on the ‘Scream’s still peerless debut album Screamadelica (which Weatherall produced).

A mid-’90s stint as part of The Sabres of Paradise followed (check their stunning Haunted Dancehall album for Warp) whilst Weatherall’s DJ sets reached legendary proportions – at this point he was one of the UK’s most in-demand remixers, and he now boasts a back catalogue of edits that includes Bjork, Manic Street Preachers, Mogwai and more. In 1996, he formed Two Lone Swordsemen with Keith ‘Radioactive Man’ Tenniswood, setting up the Rotters Golf Club label and releasing several full-lengths, including the particularly acclaimed Tiny Reminders, also on Warp.

Never one to be shackled to a particular groove or sub-genre, Weatherall’s contributed a wonderful micro-house mix for Force Tracks, a forward-thinking techno and narco-disco mix for Fabric (that introduced many to the likes of Villalobos, The Emperor Machine and more), the ground-breaking 9’O Clock Drop comp of post-punk classics (before the world and his wife discovered them) and an excellent comp of his much-loved rockabilly to Soma’s Sci-Fi-Lo-Fi series. And if that wasn’t enough, this month he releases his first solo album, a collection of slow-burning punk-funk entitled A Pox on the Pioneers, that merges Weatherall’s longstanding interest in rock ‘n’ roll and “modernist electronics”.

While we’re at it, he’s produced the new Fuck Buttons album, has a regular slot on BBC 6Music, and remains one of the world’s best DJs, as comfortable spinning nosebleed techno at German superclubs as he is digging through the crates for his more eccentric rock sets. He’s a bit of a national treasure really.

His FACT mix is subtitled ‘A Pox on the Influences’, and features Circlesquare, Dennis Wilson, The Monks, The Durutti Column, White Williams and more. We’re fucking proud to be hosting it.

Whitey – It Was Made of Night

Wayne Walker – All I Can Do Is Cry

The Monks – I Hate You

Mogwai – The Sun Smells Too Loud

The Mighty Wah! – Talkin’ the Blues