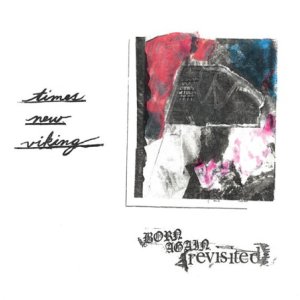 Most chat about Times New Viking, the Ohio threesome famed for their ragged approach to recording (previous albums have been done into an 8-track; this, their fourth full length, was delivered to Matador on a VHS cassette) is soaked in hyperbole. London-based free rag The Fly referred to the band’s last album as, to paraphrase, "the most amazing devastating ear-fucking noise of the decade" – this while ranking it the 47th best album of the year or something equally disparaging. On the other side of the coin, there are plenty of people who act like they’d rather eat their own face off than listen to an entire LP by such lo-fidelity fetishists.

As is the case with nearly everything in life, the truth is somewhere in the middle. Rip It Off, Times New Viking’s last album and their best known, was a grayscale pulp (not necessarily a bad thing) of perfectly good – if unmemorable – pop songs; the sort of album that sits perfectly fine in your collection alongside all those later Guided by Voices records that no one really listens to but look nice on vinyl. On Born Again Revisited, the band’s full length follow-up, the range of quality is stretched: the album’s highlights are more memorable than what’s come before from the band, and the forgettable is, well, more forgettable. Generally though, it’s much better.

At times Born Again recalls the early work of 90s Carolina noise-pop lot The Archers of Loaf (they once supported Weezer, that’s as big as they got). ‘These Days’ is a slow-burning ballad that would make a worthy closer to any of their full-lengths, and ‘(No) Sympathy’ could be a distant cousin to brasher Archers tracks like ‘Bathroom’: as far as stoopid modern lo-fi punk goes, it kicks the shit out of Lovvers and Pens, carefully choosing one line, and making it effective through repetition and minimal context. ‘Half Day Hell’ takes the bleached guitar loops of Ducktails and ups the emotion with strained vocals; while ‘Something More’s cluttered, direct approach is equally effective.

Of course, recording music in a time where it’s still far too fucking en vogue to be a half-arsed guitar band who totally can’t play their instruments but get by on warehouse cred and coming up with two rad hooks per album, you’re always going to get forgettable mulch like ‘I Smell Bubblegum’ and ‘Take the Piss’. But Born Again Revisited proves that Times New Viking are good songwriters: ones that understand the power of minimalism and repetition, and have a knack for hook-based roughshod pop that fits nicely in the lineage of Dinosaur Jr, Guided by Voices and the rest.