Roof Light: In Your Hands EP 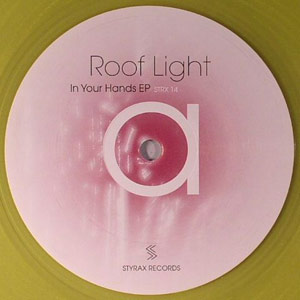 Rooflight is a young British producer, and In Your Hands is his first EP, a four-tracker of terrifically nuanced garage variations and broken techno. Perhaps surprisingly it finds its home on Styrax, a label primarily associated – mainly via its more prolific Styrax Leaves offshoot – with deep, Basic Channel and Detroit-influenced 4/4. Cast your eye over Styrax’s catalogue, though, and you’ll see they’ve always dared to invest in rhythmically challenging material, most notably the ambient 2-step of Bvdub.

Opener ‘Around Here’ is excellent, and sounds like nothing so much as US techno legend John Beltran – whose best 1990s work has actually been reissued by Styrax – updated for UK and Berlin bass-heads. For me, though, the highlight of the package is ‘Heart Like An Airport Runway’, which with its liquid bassline and exquisitely chopped snares reminds me of both classic ambient jungle and the recent rain-flecked machine-soul of Actress.

The influence of Burial’s Untrue is a little too marked in the wispy vocal fragments and delay-couched woodblock rhythm of ‘In Your Hands’, but to tell you the truth its lack of originality is of secondary concern to how goddarned blissful it sounds. Closing epic ‘Radiance’ is more of a piece with ‘Heart Like An Airport Runway’; a blast of crisply edited abstract funk unfortunately let down by some Martyn-via-Detroit synth chords which just sound too over-familiar or these ears to enjoy.

For all my criticisms, I have to say that overall this is an incredibly strong debut, with even the more derivative passages carried by the unwaveringly high standard of production and arrangement. I eagerly await Roof Light’s next transmission, and you should too.