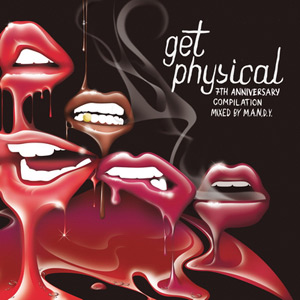 It’s been an interesting seven years for Berlin’s Get Physical. Founded back in 2002 by DJ T., M.A.N.D.Y. and Booka Shade, the label quickly established its signature sound: with production on the early releases largely overseen by Booka’s Arno Kammermeier and Walter Merziger, elements of minimal techno, electro, trance, disco and deep house coalesced into a warm, stripped-back but unashamedly "big" sound, and it wasn’t long before tracks like ‘Body Language’ and ‘Mandarine Girl’ became club and radio smashes, scooping ever award going and finding a place in the record box and iPod of pretty much every house/techno DJ and fan on the planet.

Since then, the label has grown and grown, welcoming more and more contributors outside of the T./M.A.N.D.Y./Booka sphere, and venturing into pop and experimental territories with its album releases (from the likes of Raz Ohara and even Bronnt Industries Kapital) while delivering a steady stream of club bangers on 12". Their seventh anniversary compilation, mixed by M.A.N.D.Y. reflects the breadth of the label’s current configuration, and listening to it it’s easy to understand how and why the label is no longer an underground concern.

The Booka Shade sound remains at the very heart of the Physical’s output – evinced not just by Merziger and Kammermeier themselves (who contribute ‘Borghia’ and ‘Duke’ and several co-productions to this comp), but by younger producers like Jona, whose 2004 cut ‘Learning From Making Mistakes’ is a textural and structural deadringer for Night Falls-era ‘Shade. However, there are signifcant deviations too: Riton and Heidi’s ‘To The Gum’ is a no-nonsense Chicago jack track, and DJ.T’s rolling, sampled-based ‘Gorilla Hug’ – co-produced with Thomas Schumacher – reminds us why he is still such a popular and acclaimed artist despite not being all that prolific.

If there’s a criticism to be levelled – and its once borne out by this two-disc marathon – Physical’s tracks are often either self-consciously anthemic (like Patrice Baumel’s undeniably effective but slightly hollow ‘Roar’) or overly polite and functional (Tiger Stripes’ ‘Mad At Me’, for instance). The best tracks here are the ones that take risks, the ones that are just a little bit more weird: like Booka Shade and M.A.N.D.Y.’s cover of Laurie Anderson’s ‘O Superman’, re-worked here by Cadenza-affiliated Reboot into techno-funk abstraction in keeping with the experimental spirit of the original. Matthew Dear’s ‘Free To Ask’, a track previously exclusive to his Body Language mix, is a typically successful synthesis of exuberance and introversion, while Elektrochemie’s ‘Mucky Star’ – produced by Thomas Schumacher and graced with a fantastically vampish vocal from Caitlin Devin – brings EBM bristling into the 21st century.

If a couple of tracks sound a little weak or insubstantial on their own, this is glossed over by a hghly competent mix job from M.A.N.D.Y.. It ultimately makes it clear that If there’s one thing shared by all Physical tracks, it’s the uniformly high quality of production – every one is arranged and egineered to deliver maximum dancefloor oomph, simple as. If they keep this up, there’s no reason why they won’t one day be celebrating a 14th anniversary, and other landmarks beyond.