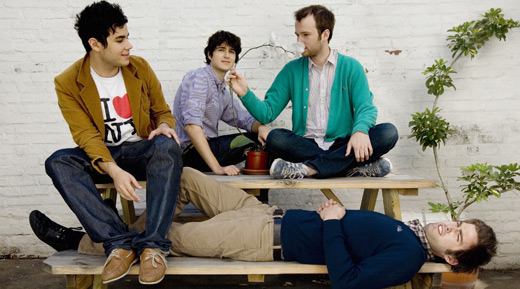 As previously reported, Vampire Weekend will release their sophomore album, Contra, in January 2010.

In the new issue of Mojo, singer Ezra Koenig reveal further details of the album and the direction they’ve pursued.

"We’re still the same band we were a year and a half later," singer Ezra Koenig tells Priya Elan "Maybe the media’s interest in talking about other stuff has passed, but you’ll see similar influences on this album even though they’re being played out differently. We don’t feel the need to move away from our original influences…"

"When we say ‘Californian’, people might think of Jefferson Airplane or Black Flag, but for us, it means a group of people, an aesthetic and a vibe…New York is essentially full of man-made things, but what makes California is the way people interact with the natural landscape. It’s much more dramatic in a lot of ways than the East Coast and I think that had a deeper cultural resonance, and it affects the way people live.

"The first album was made when were in college," Koenig concludes. "There were references to that time of our lives. We want this album to reflect what we are doing at the time. So by the nature of that, we’ve moved forward."

Read the full interview in the November 2009 issue of Mojo, out now.