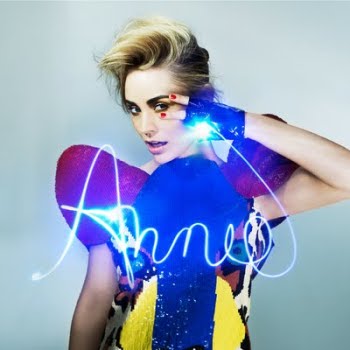 So we got the new Annie album today.

It’s good. Too early to say whether or not it’s amazing: on first listen there’s nothing on there that stands out like past singles ‘Heartbeat’ or ‘Chewing Gum’, or even last year’s ‘2 Hearts’. And there are certainly a few dodgy moments: ‘Bad Times’ is wishy-washy half-pop that sits badly with the album cover, which features Annie in purple shoulder pads sporting a La Roux quiff, and we’re definitely not down with ‘The Breakfast Song’. But our overall impression of Don’t Stop is that it’s an album that will grow on us: it’s par for the course when you’re dealing with music this overtly pop that you need to let the choruses worm their way into your head organically.

The album opens on ‘Hey Annie’, by far the biggest thing on here: it starts off like Gwen Stefani’s ‘Hollaback Girl’, with booming kicks and a backing chant of "Hey Annie!" before going into the sort of synth-led lullaby that we’ve come to associate the Norwegian singer with. The lyrics are a little trite, but we’re living in 2000-and-Xenomania, no one’s keeping score of that shit. The forgettable ‘My Love is Better’ and ‘Bad Times’ follow, before ‘Don’t Stop’ picks up the pace with the sort of off-kilter pop monologue that Little Boots’ album could have done with: there’s a subtle nostalgia to those melodies on the bridge that we pretty much want in all our pop music here at FACT – whether Robyn or CocoRosie.

‘I Don’t like your Band’ is good, but it was never going to be bad when it completely steals the template and chorus of ‘Chewing Gum’ and adds some Kitsune bass to it. The more ethereal ‘Songs Remind me of You’ and ‘Marie Cherie’ follow, neither a million miles from the doom-pop of The Knife and Fever Ray respectively. Say it quietly, but the next highlight – and maybe the best thing on Don’t Stop – is ‘When the Night’. Equal parts Lulu and Dawson’s Creek, if you’re sixteen and reading this article then don’t even think about popping your cherry to this ballad; if it goes well, you might as well end it then ’cause life won’t get better.

The album finishes on ‘Heaven and Hell’ – juxtaposing confused, frustrated lyrics with a big, bashy chorus, it’s an appropriate end to the record: you could easily take the lyrics as a metaphor to the limbo Annie found herself in with this album’s release. Like Don’t Stop itself, it’s a song that’s not sure what it wants to get across, and never quite throws off the shackles to go all out pop (the track ends on a fade-out rather than a climax), but you’re with Annie all the way. Don’t Stop has its flaws, but it’s a reminder that Annie’s still one of pop’s most compelling, engaging and endearing personalities, and the likes of Boots and La Roux still have some way to go before matching her.