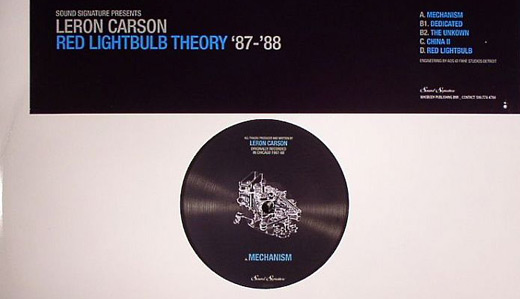 Leron Carson isn’t the most well-known or prolific of Michigan house producers – his only official release to date is 2001’s ‘China Trax’ on the Theo Parrish-split The 1987 EP – but he’s nonetheless one of the most respected.

This week sees the release of Red Lightbulb Theory ’87-’88, a compilation of tracks he recorded when Carson was in his mid-teens. Over twenty years after these tunes were cut to tape, Parrish is releasing them on 2×12" via his Sound Signature label, with some re-engineering from AOS aka Detroit’s man-of-the-year Omar-S. What’s great about tracks is how raw and unfussy they are: proper Chicago box jams, recorded without sequencing and relying on cassette tape overdubs for layering.

As a result they retain a really live, intuitive feel – proper machine funk which relies on melody and groove, slamming percussion and heavy-hitting basslines, rather than micro-detailed production. If you’ve been digging recent material from people like Omar-S and Traxx, or find yourself thirsting after the kind of music celebrated in FACT’s 20 Best Acid House, then you need to check this record pronto. Listen to samples here.