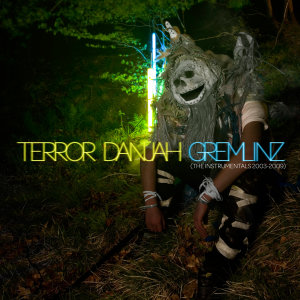 I know it’s a lame thing to say, but I wish I could listen to Gremlinz, Planet Mu’s instrumental retrospective of grime producer Terror Danjah, having never heard half of these tracks before. Not because it’s so good it would blow me away on the spot (it might, I don’t know really), but because several of these tracks were anthems on the strength of their vocal as well as the backing – hearing Terror’s remix of ‘Poltergeist’ without Wiley crying out "it’s Eskiboy, I’m starting this!", or ‘Crowbar’ without Shystie’s career-defining chorus is to only hear half their power. That’s not to mention the fact that Terror was, along with True Tiger and Scratcha DVA, a big advocate of the ‘Rhythm ‘n’ Grime’ vocal movement – something that doesn’t come across in an instrumental compilation without the vocal versions of ‘So Sure’ and ‘Love is here to Stay’.

But regardless of this, Gremlinz is great – how could it not be? You get Terror at his most pitch-bent and twisted (‘Haunted’ and ‘Code Morse’, with the amazing and underrated DOK), his most jagged and pummeling (‘Stiff’ and ‘Radar’ sound like convoluted torture chambers of the future), and his most iconic (‘Frontline’). He dabbles in 80s electro (‘Planet Shock’), jungle (‘Reloadz’) and spaced-out funk (‘Limbo’), all the while sounding like a perverse genius who never should’ve been allowed near national radio, let alone out the asylum.