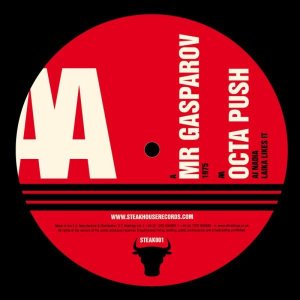 Drum ‘n’ bass producers turning their hands to dubstep is something that, famously, can go both ways. Martyn’s the best of the converts by some distance, and everyone likes a bit of Kryptic Minds on a frosty Wednesday. But Chase and Status, Benny Page, they can fuck off. I’ve never seen one of the ‘dubstep sets’ that Shy FX has been billed as playing lately, but judging by some of the ‘step that his label puts out, I bet they’re shit.

Anyway, this is all a bit of a roundabout way of saying that Mr. Gasparov, the Portuguese producer behind this track (which has also been signed to Soul Jazz’s next compilation, Steppas’ Delight 2) used to make drum ‘n’ bass. That was back in Portugal. He moved to Bristol in 2003, where he learnt about dubstep and grime by going to squat parties with posters of Rob Smith above the bogs and Al Tourettes passed out in the shower (probably). He briefly moved back to Lisbon, but now resides in Barcelona, where he contributes a show to dubstep internet radio station Sub FM.

‘1975’ is Gasparov’s highest profile release to date, and it’s a bit of a cracker. Ramadanman’s influence is all over the drums; all micro-edited clicks and woodblocks, and there’s giddy synths that rise and fall the way you might expect them to on a Bok Bok or Brackles track. Throw in some looped whistles and warped kiddie vocal samples, and you’ve got a woozy, drunken future garage cut of the highest order. Recommended.