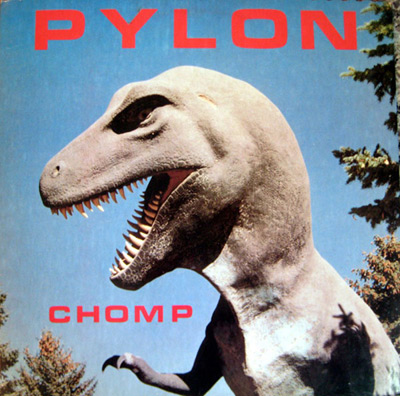 DFA Records are to reissue Chomp, the sophomore album by Pylon.

This seminal post-punk band came from Athens, Georgia. They formed in 1978 and went on to play shows with the likes of Mission of Burma, Gang of Four and The B-52s; their Athens contemporaries R.E.M. claim them as a significant influence in their early days .

It’s easy to see why Pylon appeal to DFA: their urgent sound – topped with Vanessa Ellison faintly Slits-y vocals – is based around hypnotic rhythms, angular guitar patterns and elastic basslines; though conceived and performed in the rock idiom, it’s basically dance music. Hercules & Love Affair‘s Andrew Butler has a Pylon tattoo, which tells you all you need to know.

This re-issue, out October 20, represents Chomp‘s first appearance on CD; sadly, there are no plans to press a vinyl edition, as far as we’re aware.

DFA pretty much introduced Pylon to modern ears when they re-issued the band’s debut, Gyrate, in 2007. Since then the band have re-formed and played a series of live dates, though none in the UK as yet.