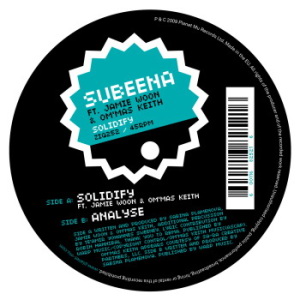 Hauntingly beautiful on both the beats and the vocals, Subeena’s first 12″ for Planet Mu sees her delve into the more soulful side of the ever-expanding dubstep genre.

A-side ‘Solidify’ sees the London producer get together with fellow Redbull Music Academy ’08 participant Jamie Woon (who you might remember from his cover of ‘Wayfaring Stranger’, memorably remixed by Burial) and Om’Mas Keith, best known to music fans as a member of Sa-Ra Creative Partners and to TV addicts as a judge on the latest series of Diddy’s Making The Band.

Recorded at Barcelona last year at the RBMA, Om’Mas takes to the keys, while the underrated Jamie Woon steps up to the mic and lays down some astonishingly beautiful vocals over Subeena’s dark ambient-tinged melodies in what’s one of her best productions to date.

On the flip you’ll find ‘Analyse’, produced by Subeena alone. More conventional than ‘Solidify’ but no less beautiful, it’s led by some Dial Records style chimes, carried by some subtly thumping sub-bass and electronic drums. File next to Martyn, Actress and – if you’re feeling ambitious – Pantha du Prince before checking Subeena’s past work on her own Immigrant Recordings imprint.