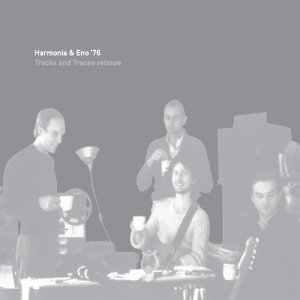 It’s a brave man who takes on the task of remixing a group of legends. Fortunately for us, Shackleton has balls to spare. Eno’s full-length collaboration with Harmonia in the early autumn of 1976, Tracks and Traces, may have lasted only 11 days and been unreleased till 1997, but it is arguably one of the most important meetings of minds in late 20th century popular music: the first collaboration between the English art rock theorist and the Krautrock underground, which fed directly into the mood pieces of David Bowie’s Low and all that that implies. Like Bowie in ’76, Shackleton has lately decamped to Berlin and his music is already mutating into strange and exciting new shapes (check out the excellent Three EPs on Perlon).

This latest remix was commissioned by Allez-Allez for their Amazing Sounds label and forms part of an EP shared with Appleblim and Komonazmuk. For his part, our intrepid sonic explorer cuts the 15 minute, 50 second original of ‘Sometimes in Autumn’ down to a ‘mere’ 10:17. On the Harmonia & Eno ’76 track, analogue synths pop, swoosh and flutter, simulating the feel of walking through a forest on an autumn afternoon; one moment they sound like the cry of a strange bird, the next like a stiff breeze at your back. Eno would develop this kind of environmental music further on 1982’s Ambient 4: On Land.

With this remix, Shackleton keeps the atmospheric intensity of the original track but stamps his own identity on proceedings. Whereas the 1976 piece is almost beatless, a motorik rhythm hinted at rather than openly expressed, the new version adds drums and bass almost from the off. Crucially, however, Shackleton’s rhythmic elements sound like an integral part of Harmonia and Eno’s aural habitat rather than some invasive alien species fucking up the food chain. That’s not to say that everything is cosy in this soundworld: is that thunder in the distance or gunfire? THC paranoia: you run, stumble, see beetles feeding on rotting wood. Your head clears, you find the path out, relieved but invigorated.