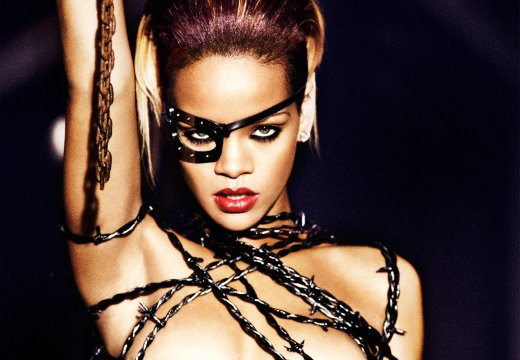 The follow-up to 2007’s Good Girl Gone Bad, it will be released via Def Jam on Monday November 23, and preceded by single ‘Russian Roulette’, which will be debuted at 4.23pm GMT on October 20 NOW!, via the vocalist’s website and national radio. The single was written by Ne-Yo.

The-Dream, who co-produced Rihanna’s biggest hit to date ‘Umbrella’ (and who’s a fucking dude and a half in his own right; read FACT’s review of recent ode to the facial, ‘Sweat it Out’ for proof) features on Rated R, along with his regular production partner Tricky Stewart, Justin Timberlake, Stargate and and dodgy drum ‘n’ bass duo Chase and Status.

With no mention on the press release, we’d wager Hudson Mohawke, who was rumoured to be contributing production to the record, won’t feature after all: he recently revealed in an interview with Dummy that ‘Fuse’, from his recent album Butter, "was supposed to go to her. Basically they didn’t want it if it was going to go on my album as well but I didn’t want to not have it."

Mohawke does reveal in the same interview though, that he might be working with Erykah Badu.