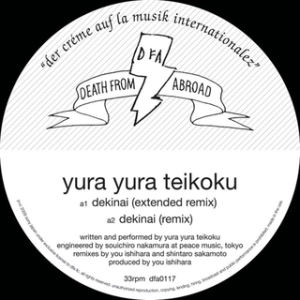 Sitting somewhere between the warped hypnotica of Silver Apples and the future disco-punk of Joakim lies this 12” from Yura Yura Teikoku, a Japanese underground pyschadelia act beloved in their homeland for nearly two decades and recently picked up on by Stateside hipsters such as Rub n Tug and James Murphy. It’s clear to see why the latter loved ‘Dekiani’ and b-side ‘Sweet Surrender’ so much – they’re packed with the building blocks of any DFA release – freaky pop melodies, classy production, and grooves looser than a pair of clown’s trousers.

YTT were a new one on me and some virtual crate digging reveals that their 20 year output is something of an undiscovered treat – some ragged psychedelic surf rock not a million miles from where Dengue Fever occupy at the moment, some oddball lounge stuff, and bits that sound like Procol Harum! If you’ve some time to kill, it’s worth delving in and checking but in the meantime, anyone that digs the DFA sound (ie people with working ears) should roadtest this fine 12”.