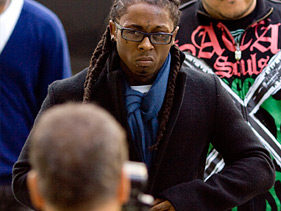 Uh oh. MTV report that Lil Wayne has pleaded guilty to gun possession in a Manhattan courtroom, in a case stemming from his 2007 arrest in New York.

Say MTV, "the rapper will be sentenced to one year in prison as a part of his plea deal and must also give up his passport. An emotionless Wayne quietly told the judge yes when asked if he understood the terms of the plea he was making.

"Asked what type of gun he possessed, Wayne [looking a lot like Jammer these days – Ed] said, "A.40-caliber semi-automatic."

"His stepfather, Birdman, was in attendance. The hearing began at 10:05 a.m. ET and was over in 20 minutes. Wayne will be sentenced in February of 2010 and is expected to serve eight months, assuming good behavior.

How this affects the two Lil Wayne albums scheduled to come out this year, we don’t yet know.