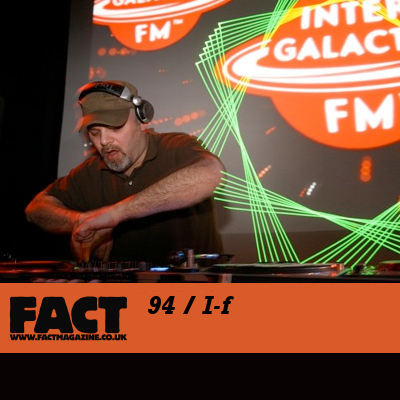 FACT Mix 94 is by a man frequently described as the world’s greatest DJ, the one and only I-f.

The mix, exclusively recorded for FACT, is a live set from the IFMX, I-f’s regular show on Intergalactic FM – the internet radio station that he founded to promote synthesizer music in all its forms. More on this later.

I-f – real name Ferenc van der Sluijs – will be best known to many as creator of ‘Space Invaders Are Smoking Grass’, one of the most influential dance music tracks ever, arguably representing both the birth and the creative peak of electroclash (though it was conceived well away from the ‘clash fashion nexus of London and New York). A disco fiend first and foremost, I-f’s seminal mix CD, Mixed Up In The Hague Vol.1, is cited by many – including fellow freak Morgan Geist – as the catalyst for the italo disco revival which is still underway, and Cocadisco, the aptly titled album Ferenc recorded with Intergalactic Gary as The Parallax Corporation, is one of this decade’s finest.

I-f’s involvement in dance music begins in the early 90s, when he was a member of Unit Moebius, the seminal Hague-based acid-techno act often referred to as “Europe’s answer to Underground Resistance”. Raw, jacking acid was the order of the day for many release to come, and the various releases he recorded under the name Beverly Hills 808303 – including ‘Acid Planet 4’ and ‘Greatest Shit’ – are some of the craziest squat party jams you’ll ever experience. Other I-f aliases include Housemaid, Jungian Archetype and Frank Castle, and as well as Unit Moebius and Parallax Corporation he’s been involved in such groups as Los Muchachos Gruesos and Brothers Fuck & Friend, and his two best-known labels are Viewlexx and Murder Capital.

But for all the production and label work that’s made I-f’s name, it’s arguably his role as radio broadcaster that’s most admirable. His first venture into radio was the legendary, now defunct CBS (Cybernetic Broadcasting System), which gave the kind of attention to out-there disco, italo and electro unthinkable for a mainstream station. CBS paved the way for the bigger, bolder and more “future-proof” Intergalactic FM, without doubt the greatest internet radio service and community on the planet (well, if you like electronic music). If you’ve never visited the IFM site, you’re in for a  treat: four separate, continuously streaming channels, each dedicated to a slightly different sound/aesthetic. IFM One is Westcoast Non-Stop Action, which brings you “the west coast sound of Holland” – i.e. that strain of disco, italo and electro espoused by labels like Clone, Viewlexx, and others in the region of Den Haag and Rotterdam. IFM Two is Intergalactic Classix, which, guess what, is all about classics – from the obscurest kosmische nuggets to Notorious BIG’s ‘Hypnotize’, there are no rules other than that the music be GOOD. IFM Three is The Dream Machine and probably FACT’s favourte IFM channel, home to strange soundtracks and synth atmospherics, from giallo scores and spooky jazz themes to the incidental music from Columbo, all interspersed with vintage movie trailers – yes, The Dream Machine really does exactly what it says on the tin. Last but not least there’s  IFM4, where the original CBS lives on: I’ve just logged on now and in the last hour tracks by Octave One, Soft Cell, Section 25 and Don Ellis have been played.

What’s great about Intergalactic FM, above and beyond the quality of its music and personality of its presenters – Legowelt’s Astro Unicorn show is a weekly highlight, by the way – is that it actually tells you what the hell it is you’re listening to. Stream IFM in your iTunes and the track title of the currently playing song and the one that played  before it will roll before your eyes; the IFM homepage will cover the playlist for the last hour. Intergalactic FM really shares its finds and its expertise, it doesn’t just show off.

That said, I-f has kept the tracklist for his FACT Mix to himself, trusting that the heads will do the track-spotting for themselves (all IDs welcome – about all we can discern is that the second track is from Gesloten Cirkel’s recent Murdercapital 12″). Recorded live last Thursday, it’s an hour-long session of disco, synth-pop, smacked-out acid house and low-slung boogie that gives you a good flavour of what Intergalactic FM and I-f are about. The guy’s a bona fide hero of hours, and we’re truly honoured to have him on our FACT Mix roster.

The Intergalactic FM crew are teaming up with their pals at Creme Organization for a party at ADE this Saturday 24, October. Talking place at Melkweg in Amsterdam, I-f will be joined by TLR, Alden Tyrell, Legowelt, Rude 66, Orgue Electronique, Alexander Robotnick, Bangkok Impact, DJ Overdose and many more, all celebrating “The Westcoast Sound of Holland’. If you’re in – or can be in – Amsterdam this weekend, you need to be at this. More info and tickets here.