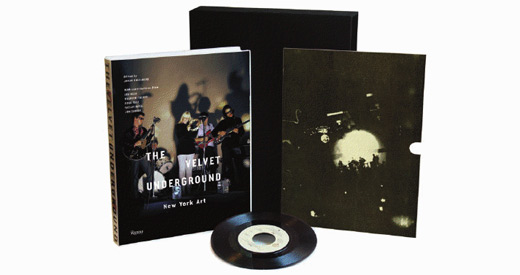 The book, described as the "first ever rock monograph", includes never-before-seen photographs of the The Veulvet Underground, Andy Warhol’s cover and poster designs, Lou Reed’s handwritten music and lyrics, underground press clippings, reviews, flyers and countless other visual materials and writings by the likes of Vaclav Havel and John Savage. For more information on the book’s contents, click here.

The ‘deluxe edition’ of the book is limited to 400 numbered copies. It’s housed in a windowed clamshell box with type design from a rare VU gig poster. As well as the book, the package contains a special vinyl slipcase featuring an early version of the cover art for the band’s second album, drawn by Steve Nelson, and a 7" 45rpm record signed by Lou Reed and Mo Tucker and boasting two "extremely rare" versions of Velvet Underground tracks ‘If You Close The Door’ and ‘Real Good Time Together’ (they’re from the personal collection of Mo Tucker and have previously only released on a limited edition box set many years ago).

VU freaks take note: there’ll be an exhibition of VU memorabilia, curated by New York Art editor Kugelberg, will be on display at the 32nd Mega Record and CD Fair which takes place at Jaarbeurs Convention Centre in Utrecht, The Netherlands on November 21 and 22, 2009.