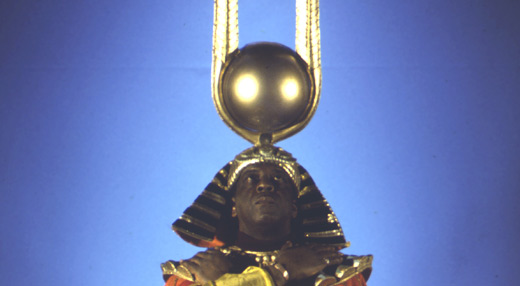 Some of you are probably familiar with Rush Hour, the Amsterdam-based house and techno label that’s home to the likes of Aarvarck, Tom Trago and Rick Wade, but perhaps less so with Kindred Spirits – a Rush Hour sister label dedicated to new and reissued recordings of jazz, folk, hip-hop and raw, soulful music of all kinds.

Kindred Spirits is run by ‘dam-based DJ KC The Funkaholic, and in the recent past has brought us such beauties as Theo Parrish‘s wigged-out 12" remixes of Sun Ra, Nacho Patrol’s superb African house EP Futuristic Abeba, and Dorian Concept‘s debut album When Planets Explode.

Now Kindred Spirits has teamed up with the Art Yard label to bring you two collectors’ vinyl editions of classic albums by Sun Ra and Salah Ragab.

Sun Ra’s concert album Disco 3000 is generally regarded as one of the cosmic jazz maestro’s definitive statements; it was recorded at Milan’s Teatro Cilak on January 23, 1978 with sidemen John Gilmore, Michael Ray and Luqman Ali. This new edition is limited to 500 copies worldwide, and pressed on 180gm vinyl with extensive liner notes. It’s available to pre-order now.

Kindred Spirits and Rush Hour are also collaborating on a collectors edition of Egyptian Jazz by Salah Ragab and The Cairo Jazz Band. It’s the sound of a truly crack band responding to the influence of 60s and 70s American jazzers like Ra and Mono Santamaria, and is one of the most addictive and unusual jazz records in existence, and opens with the truly classic ‘Ramadan In Space Time’. The lbum has previously been issued by Art Yard, but the Kindred Spirits hook-up is a new and limited edition, pressed on 180g with a heavy cardboard sleeve. Pre-order and check out clips here.