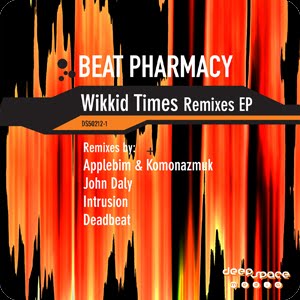 From the slack, elastic chug of Deadbeat’s remix of ‘Ghostship’ and John Daly’s mix of ‘Time’, on which the Irish producer sets Damon Aaron’s yearning vocal against a fug of narcotic melancholy, to the persistent hi-hats and gaseous chord stabs of Appleblim and Komonazmuk’s relentless refix of ‘Nuclear Race’, this release should further the current resurgence of house and techno amongst London and Bristol’s more discerning club nights – see recent sets from Cooly G and Scratcha DVA, or Appleblim’s Applepips label nights for examples.

While the quality of the tracks included is commendably consistent, it’s the contribution from Steven Hitchell, one half of Echospace (Detroit) performing under his Intrusion alias that really sets the EP apart. As much an evocation of physical volume as it is a straightforward techno track, Hitchell’s remix of ‘Sunshine’ describes, with extraordinary economy of means, a kind of limitless expanse of desolate nothingness, in which Paul St. Hilaire’s vocal floats, untethered amongst sibilant clouds of analogue static and hiss.