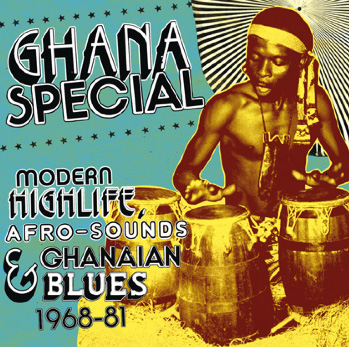 Soundway , the UK-based label responsible for some of the best African and South American music compilations of all time, is to embark on what head honcho Miles Cleret calls its "most ambitious project to date".

Ghana Special comprises 33 original and previously "un-reissued" tracks from Ghana, the culmination of nearly decade of research by Cleret in the cities of Accra, Tema, Cape Coast, Kumasi and Takoradi, "knocking on musicians’ doors and visiting ex-distributors, DJs, collectors, manufacturers and shop owners",

Over to Cleret for a more informed introduction to the collection than we could ever muster:

A turbulent decadeGhana in the 1970s: highlife, rock, and soul collide and merge with tradition and culture. Styles and fashions combine, creating eccentric fusions. A new generation renews old musical customs.As with this album’s sister release Nigeria Special: Modern Highlife, Afro-Sounds Nigerian Blues 1970–76, this collection hopes to do nothing more than capture a snapshot of what was arguably the most colourful and interesting period in the nation’s musical history. This was a time of shifting styles and a reorganisation of not only the music industry but also, in many ways, society itself. Music often mirrors these changes: although, until this time, many of the big dance bands of the 1950’s and 60’s had dominated the smaller, mostly foreign-run recording industries, it became a sign of how society was shifting and reorganising itself, when, in the place of the highlife big bands, many of the highlife guitar-bands (that had until now been seen as music of the poorer sections of society) were starting to sell far more records. HighlifeMany of the themes that the two camps of music dealt with express this well. Typical big band numbers were songs of love and life with an emphasis on upbeat, happy lyrics; whereas common themes in much of the guitar-band repertoire at this time were class issues, death, poetic laments, social commentary and religious odes. To this situation came a new generation of young musicians that were trying to forge a new style – a modernised ‘stew’ of musical ingredients that included elements of folklore, along side slices of highlife (a ‘bastardised’ music fused from the meeting of colonial and local musical traditions) jazz and rock from overseas interpreted in an ‘afrocentric’ way that was typical of the times. This was a time of boundaries being broken and was to be the last and strongest wave of recordings made before financial crisis and revolution hit Ghana hard in the 1980s reducing the recording industry to a shadow of it’s former self, when many musicians found themselves permanently out of work.The SelectionFans of the previous Ghana Soundz albums will be pleased to hear further tracks from The Uhuru Dance Band, Honny and the Bees, Sweet Talks & Ebo Taylor plus Oscar Sulley whose track ‘Bukom Mashie’ was featured on the original Ghana Soundz album and led to his inclusion on the soundtrack for The Last King of Scotland. Hedzolleh Soundz make a Soundway debut – a band that would go on to record some of Hugh Masekela’s finest records and a band whose album………will be reissued later in the year on Soundway. Over the course of the two CDs there are thirty-three original and previously un-reissued tracks from the time: obscure A-sides, B-sides and album cuts that have resisted a second look until now.

Soundway aren’t the sorts to be stingy with packaging either: Ghana Special will be available as both a double CD hardback case-bound book and a lavish 5xLP vinyl box set. The CD book features "44 pages of history, photographs and original record scans and tells the story of a unique period in West African recording history" (sample page above). It’s out November 2, with the vinyl set to follow soon after.