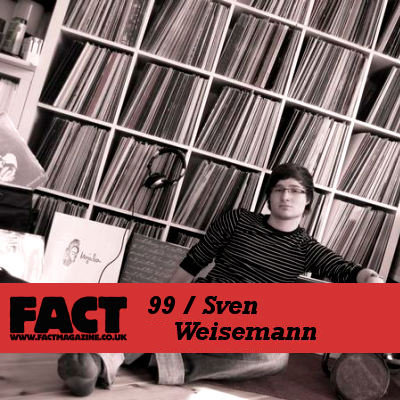 This Monday’s exclusive mix comes from one of the decade’s most talented producers – of house, techno, modern classical and more – Sven Weisemann.

Still in his early twenties but with an immense body of work already behind him, Sven Weisemann is one of the most precociously talented producers of his generation.

His latest release, the Xine LP, finds him indulging his interest in ambient and cinematic sounds, but his FACT Mix has definitely been assembled with the dancefloor in mind. An abundantly funky mix of jacking house and skipping techno, it gives you some idea of what to expect when Sven plays alongside the mighty Chez Damier at London’s Lost In The Loft party on November 14. No tracklist as yet, but we’re pon de case.

Read our interview with Sven on the next page.

“Xine is an imagined journey through all elements of life for me, and is my own soundtrack of my thoughts, feelings and perceptions in my head … I dedicated it to my late grandparents.”

Tell us about your beginnings in music, how you first started out DJing and producing.

“I first started playing at home when I was 12 years old and then two years later in the clubs. The first records that I bought were Jeff Mills, Detroit, Downwards stuff. I began producing in 2001 with Rebirth and FruityLoops Studio; my homebase for all my productions.”

What have you been listening to lately?

“Lately…Soul, jazz, classic, house, deep house, and soundtracks as well. I’m listening to a lot of fresh and old stuff at the moment, I like the mix of different stuff. My discovery of the year was Lamb and Lusine’s stuff, really nice productions.”

You’ve just released your Xine album. Can you tell us about that project?

“Xine is an imagined journey through all elements of life for me, and is my own soundtrack of my thoughts, feelings and perceptions in my head. The Xine project is really important for me, I dedicated it to my late grandparents. The sound is composed of piano, strings and cello with a mix of electronic sounds and effects. All instruments played myself.”

There’s obviously quite a soundtrack-y/modern classical feel to Xine, and a lot of your other work. Are there any particular film scores or composers that you’re a big fan of?

You’re playing Lost In The Loft with Chez Damier. Is he someone you’re a fan of?

“I’m a big fan of Chez’s work, my collection is nearly complete of Prescription and Balance. Thomas a.k.a Don Williams and the owner of Mojuba and A.R.T.Less invited Chez for a Mojuba night last year at the Panorama Bar and it was a great party with a good atmosphere. Saturday is a honour for me to play with Giles and Chez together, we rock da house.”