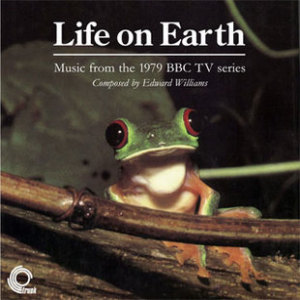 Jonny Trunk is a crate digger and collector of obscure musical esoterica the likes of whom we’ll probably never hear of again in our lifetime. Such is his indefatigable dedication to the cause he is rivalled only, perhaps, by the geek/hipster hybrid that is Andy Votel. That’s good news for us mortal music fans though. After all, I’d do a great many things to hear this wondrous album but I wouldn’t buy someone’s entire, 500 vinyl-heavy record collection just to get to it. Luckily for us, Mr. Trunk did just that.

Life on Earth was a precedent-setting natural history programme that first aired in 1979. The program’s sound design was created by Edward Williams but was never officially released. In fact, the copy procured by Trunk was one of a handful Williams privately pressed for posterity on behalf of family, friends and members of his orchestra. Thanks to Trunk’s diligence, we can now bathe in what might well be God’s own library muzak.

Taken out of its original context, Life on Earth still sounds magical as it pours out of your speakers evoking – entirely appropriately – another world in its sprawling sonic smorgasbord. You may well never have any interest in the sex life of the Fern but that doesn’t distract from the awe-inspiring, panoramic, wordless scope of the music that accompanies it. The exotic is signified by twinkling vibraphone, plucked harps and what sounds like a Theremin but, as clichéd as these aural tropes look on paper, they serve to re-enforce the wide-eyed-wonder of the music as flutes and string flourishes conspire to conjure images of Swarming Hordes or The First Forests. Life on Earth should go some way to (re?) establishing Edward Williams as a genuinely important composer. As much as organic, classical instrumentation is utilized it meshes seamlessly with primitive electronics suggesting Williams worthy of a throne amongst the BBC Radiophonic Workshop’s pantheon.

Here then is life in all its slimy, frightening, mischievous, pastoral splendor. Truly, the first collection of music to genuinely warrant that overused phrase “beguiling and beautiful”.