King Midas Sound: Waiting For You 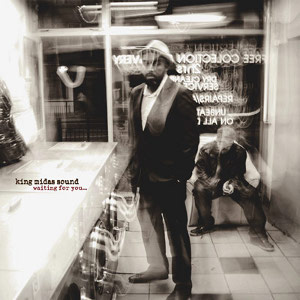 Creeping dub dread and post-millennial tension permeates every fibre of Kevin Martin’s latest incarnation as King Midas Sound. But his new album, made in collaboration with Trinidadian poet and singer Roger Robinson, is not what some will expect from the man who gave us such chrome-plated, sound-boy-squashing cuts as ‘Poison Dart’ and ‘Skeng’, under his cybernetic dancehall pseudonym The Bug.

Waiting For You sees Martin lock down the studio controls, while Robinson leads the way through an apocalyptic, dystopian London, his falsetto voice and achingly evocative lyrics a beacon in the half light, guarding against the unknown fears that lurk in the peripheries. Largely eschewing the poetry of his own solo records, Robinson draws inspiration from the reggae greats and lover’s rock heroes of yesterday – cats like Dennis Brown, Gregory Isaacs, Junior Murvin – both in his delivery, and in his tales of love lost and found. Soul songs sung in cavernous dub spaces, in this world memories are fragments, connections are tangential, and the reggae sweetness of the past is inverted, forced inside out, to become something far weirder, more threatening, and strangely beautiful.

Gone are the crunching, relentless sub bass barrages of The Bug. Here, the vibe is deep, fathomless, an incomprehensible atmosphere that seems to evoke the aftermath of some terrible event. ‘Cool Out’ is a sinister nursery rhyme, a dubbed, slow clank, challenging other soundsystems, daring them to conjure something so bathed in blue light and quaalude drugginess. The title track has an almost trip-hop atmosphere, perhaps close to Massive Attack’s work with Horace Andy, but King Midas Sound have an identity very much their own. When another trip hop touchstone, Tricky’s Maximquaye is evoked, it’s probably because that’s a record that has stood the test of time, as this one undoubtedly will too.

It’s Robinson’s voice that carries the whole affair, filled with hope and yearning, rich in tone. When he reverts back to poetry mode, over the sinister, hungry ghost uncanniness of ‘Earth A Kill Ya’, it’s his commanding, ecological warnings that resonate most, despite the mellifluous backing vocals of Hitomi from Dokkebi Q (sounding a lot like Martina Topley-Bird), and the bizarre, arcane temple sonics that growl beneath.

This is a masterclass in 21st century dub soul disquiet – consider the gauntlet thrown down.