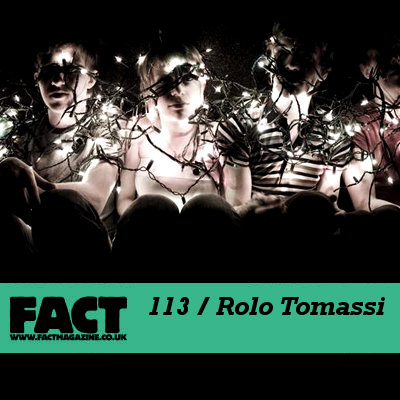 This Friday’s FACT mix takes the form of a session from Rolo Tomassi, the Sheffield-born band who’ve just finished recording their second album with US super-producer Diplo.

The band made their name on the back of their raucous live shows and various cassette / CD-R releases on James Spence (keyboardist, vocalist and compiler of this mix)’s Mayday label, including split releases with Cutting Pink With Knives and Mirror! Mirror!

They eventually signed to Holy Roar records (sometime home of Gallows, Dananananaykroyd and more), and released debut album Hysterics. More live dates followed, including the Shred Yr Face 2 tour with Fucked Up and The Bronx, and in October ’09 they flew to LA to record their second album with Diplo, the boss of Mad Decent and one half of Major Lazer.

Rolo Tomassi’s FACT mix features Silver Mt. Zion, Sonic Youth, Toro Y Moi and more, and makes for particularly enjoyable listening on the sort of cold morning today’s treated us to. Download it below, tracklist and an interview with the band is on page two.

“Hello. It’s a New Year and we’re preparing to be very busy hopefully. We’ve almost finished mixing our new album and have a small tour of the UK approaching as well as our first trip to Australia which we’re very excited for.”

Tell us about the mix you’ve done for FACT. ‘Could’ve Moved Mountains’ is one of our all-time favs by the way.

“Firstly I should say I’m a big fan of making mixtapes/CDs for friends so it was a joy to do! I wanted to make a ‘mix’ that was truest to the word so I’ve included different styles across the board and the order of the tracks has a gradual flow from genre to genre I think. Some of the songs are things I was listening to last year with other tracks that I thought fit well in amongst that to help the continuity of it. I really like albums that end with long songs so putting ‘Could’ve Moved Mountains at the end was a conscious decisions. I’m not a huge fan of A Silver Mt Zion but I really like the album that that song is from and would put that song in my favorites of all time. Not to be too grave but I’d like that song played at my funeral (bad bad pun). It’s beautiful.”

You finished recording your second album late last year, right? Tell us about it, and how does it differ from / continue Hysterics?

“We finished the recording process at the end of October/start of November. We wrote it between the end of June and September inbetween shows we had over the summer. Despite us working to a tight schedule with it I think that because we had a clear idea of how we wanted it to sound, the whole process was easier than Hysterics. I feel as though it continues on from the blueprint we laid down with Hysterics and that with this album we’ve come closer to making the band sound how we want it to sound. The songs have more structure and direction and the whole sound of the band is a lot stronger.”

How was it working with Diplo? Other than the fact you got to record in LA rather than Sheffield of course.

“It was a great experience. The people he got involved to come and help with the recording were fantastic to work with and Diplo was a lot of fun to be around. It was a very laid back experience once we got over the initial headfuck of being the other side of the world recording an album.”

How do you think his involvement has altered your sound?

“I don’t really think his involvement changed our sound if I’m honest. We did a joint interview for another publication while we were there and he raised the point that while usually he is involved with the artists he produces from the stage of writing, we went in with an album that was fully written and it was a new experience for him. I’d say when it came to vocals he had input and was a good coach for Eva, especially when it came down to the cleanly sung vocals. His influence with it was mainly making us comfortable and helping us to make the best album we could at that point in time.”

And what else can we expect from Rolo Tomassi in 2010?

“Hopefully a lot of touring. Last year we played half as many shows as we did in 2008. We like to tour a lot and are hoping to reach out and visit more places that we haven’t been to before so touring Australia in February is a great way to start the year!”