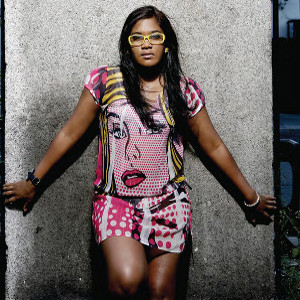 Cooly G is impossibly prolific – it’s only a couple of days since we got this and already she’s put eight new tracks up on her myspace and announced she’s finished another four. And in a sense these are more of what we’ve heard from her before – old-old-school house music sounds, galloping funky patterns, super-deep subs and her sultry vocal phrases sung eerily as if emerging from within a dream.

But there’s something new on three of the four tracks: trombones. Big parping massed trombones, making tense film-sountracky atmospheres, turning the tracks even more – to use one of Cooly’s favourite terms – dramatic. On top of that, her production is getting steadily sharper, the contrasts between percussion and atmospherics more effective, and the vocals more confident, especially on the harmonised ‘Last Nite’. The half-stepping, militant-sounding ‘The Strip’ is the most radically fresh track here and will be the one that grabs dubsteppers and electronica lovers as opposed to house-heads, but even though the other three don’t diverge as radically from her previous work they all show someone whose lunatic workrate clearly isn’t stopping her growing as an artist just as rapidly.