Royal T: 1up or Shatap 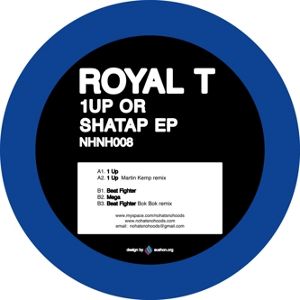 Available on: No Hats No Hoods 12″

While the grime stars of yesteryear cash in with chart-friendly pop hits, a fresh-faced generation is rising up through the underground, remoulding the genre into something altogether new. Southampton’s Royal T is just such a producer. Ignoring conventions and rules, his 2009 subterranean hit ‘1 Up’ envisioned grime as a tabula rasa for him to go wild and conjure an outlandish new form from a basic set of rudiments.

Now released as part of the 1 Up or Shatap EP, along with a clutch of remixes from bass music voyagers and new Royal T material, it’s still the title cut that shines brightest. A ‘1 Up’, in video game parlance, is an extra life, and accordingly, T welds the cut together from the primitive bleeps and chip music circuit hums of a classic Super Mario Bros game. Archaic, cheap blips ride an unstoppable bass propulsion and chattering, polyrhythmic groove: an unstoppable and addictive amalgam, at once aggressive and invigorating. The half-remembered sounds of youth are reconfigured into a simultaneously retro and futuristic rhythm – a ruthlessly efficient slab of DIY funk.

Blunted Robots man Martin Kemp brings one of his uncategorisable, neo-funky alloys to the table on a remix that evokes the mania of the errant Italian plumber running rampant under the influence of his beloved mushrooms, with a stabbing key riff interjection in the breakdown. ‘Rocks’ serves up a steroid-driven grime interpretation, all Joker G-funk synths and sulphuric bass riding an out-of-control beat.

The B-side offers ‘Beat Fighter’, a more intense, wobbly grime stepper; the genre-trashing Bok Bok of the Night Slugs crew steps up on a grimier tip than usual, offering a raw, nice and nasty relick. The original of ‘Gargoyle’, meanwhile, sees horror flick synth strings bring the drama, paired with fast drum machine claps and wobbling bass that the dubstep set wouldn’t sniff at, while Silencer remixes in raved-up fashion, introducing diva vocal snippets and upbeat syncopated poly-rhythms for a post hardcore delight. Lastly, ‘Mega’ slows the pace of the EP but keeps the filmic sense of tension high, while J Beatz’ remix adds a rich seam of melancholia and urban blight.

An impressive EP that proves the grime world can more than hold its own against dubstep’s most impressive players.