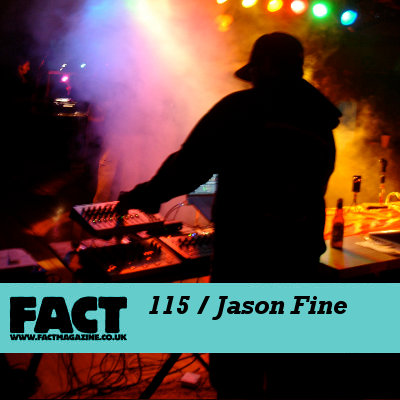 This Friday’s exclusive FACT mix comes from Jason Fine, an up-and-coming house producer who’s released on Omar-S’s FXHE label, and been an office favourite since we first heard his stunning Future Thought album – one of our Best of 2009 – last year.

The Michigan-dweller’s sound looks to the golden years of Chicago and Detroit club music, full of yearning melody and with an electro-influenced bulbousness that invites comparison with Mr Fingers, Virgo et al. In the era of rigidly quantised, precision-tooled production, the live, unsequenced feel of Fine’s drum and synth programming is as bracing as a smack on the chops. We had to get him on the FACT mix, and the results are superb.

Not to place the reference points too highly, but fans of Detroit legends Drexciya and the city’s current house music golden boy Kyle Hall should both be into this – and there are wonky synth-led moments that will appeal to followers of Holland’s Legowelt. You can download Fine’s FACT mix below; a full interview with the man is on page two.

“I started to realize how much raw human energy can be captured and conveyed through these styles of music, and I’ve been an addict ever since.”


When did you first begin making music? What inspired you to get started?

“I got my first set of turntables when I was 15 years old. That was 1995. I started fucking around with hip-hop mainly. I mentioned on the Half Stereo interview that a Juan Atkins mix really did it for me as far as getting into techno / house goes: the Wax Trax Mastermix one he did.

“Another one I came across was an Astralwerks release called Detroit: Beyond the Third Wave. That Kosmic Messenger track ‘8th Wonder’ followed by Kelli Hand’s ‘Come on now Baby’ on there…shit, words cannot describe the energy that is captured in those tracks, they simply make you want to move. I used to dance in my fucking car banging that shit driving down the road. I’m still awestruck by it today when I listen to it.

“Shortly after that I picked up my first keyboard then the shift really started towards production vs DJing. I guess that is when I started to realize how much raw human energy can be captured and conveyed through these styles of music, and I’ve been an addict ever since.”

How would you describe your sound?

“Old school, raw, from the heart. I like to use older-sounding drum sounds and synths, not much of a fan for the blips and bleeps type stuff these days. That shit has no soul. I usually reach for the 909, 808, 606, linndrum, drumtracks, real sampled percussion sounds, moog synths, old korgs – poly 6, dave smith instruments, etc. type of stuff when I’m laying down a track.”

Did you feel a lot of pressure being a house producer from Michigan? Do you ever resent the weight of Detroit / Chicago’s musical heritage or is it more of an inspiration?

“Ha, yes and no. There is definite pressure to keep it real, keep it from the heart. But if you are in it for the right reasons then this should come naturally. It is by far more of an inspiration than a weight or burden. It’s also very humbling – I don’t have delusions of grandeur because I’m so respectful of what has come before me. I also draw a lot of inspiration from Detroit hip hop, it’s some of the best shit coming out these days as far as I’m concerned.”

“I’m not much of a fan for the blips and bleeps type stuff these days. That shit has no soul.”


You have a quite a raw, warm sound; there’s a live feel to the drums / programming. Is this something you’re deliberately going for? Do you think that raw feeling is something missing in contemporary house/techno?

“This is absolutely something I’m going for. This was one of the things that differentiated real techno and house music from crap for me – you can hear it in the percussion, you can tell when someone really put an extra effort into getting a live feel out of the percussion through either playing it by hand, or adding swing in the right places so it forces you to move your ass, it’s funky, it can’t be ignored. I like that. Goes beyond the tired typical perfect 16th note quantized “kick hat clap, kick hat clap”. My father was an amazing rock n roll / jazz drummer, so growing up listening to him played a big role in infecting me with the drive to go further with percussion.

“That was what a lot of the earlier Detroit stuff showed me – get creative with your percussion, add swing, make that shit funky. I think this is missing from today’s mainstream house and techno. Real washed-out, bleached club shit never really has much going for it in the way of unique and creative percussion patterns. That shit just has no soul. It’s made for drug users, not the heads who want the music to take them away. Actually I find most of the underground, real shit I come across these days to still have lots of love in the percussion, lots of soul.”

Are there any contemporary / current producers whose work you particularly admire?

“Yeah, aside from all the hip-hop guys I mentioned in the last interview, I really like Luke Hess, Andres, Omar-S, M[arcellus] Pittman, TR One, Big Strik (a new FXHE artist), Theo Parrish, Scott Ferguson, Rick Wilhite, Rick Wade and of course Dam-Funk. These guys aren’t even necessarily some of the “newest” producers out there. They’re just what comes to mind in the moment right now.

“One disclaimer I need to make is that I’m not even an active DJ or audiophile, so I’m not out there jumping on the latest releases, or even trying to listen to all the latest shit coming out. Part of preserving a unique sound as a producer for me means somewhat isolating myself from what’s ‘popular’. More often than not when I play a show it’s using Ableton / APC as the brain accompanied by any number – or none – of my hardware machines / synths. I really enjoy playing my own stuff and being able to take it apart on the fly, etc. etc. I can’t do that with vinyl or even digital DJ setups.”

How did you first hook up with Kontra-Musik?

“Myspace. As much as I hate that shit, it really is useful for networking with music…Ulf reached out to me, wanted to do a release, I was down for it. He’s a real chill cat.”

A lot of house/techno producers shy away from album-length releases, but you seem to favour them (you’ve released two in the last couple of years). Is this fair to say?

“I suppose…I think most guys / labels want to keep releases happening, keep the wheels turning fast, check out the newest shit! On the other hand a full length is cool because it just feels more special to me, it feels like a complete body of work. I like both. Doing a full length every six months isn’t sustainable, but dropping a two to four track EP every 4 months is reasonable. Actually lately i have felt like doing some EPs versus LPs.”

How – if at all – would you say your sound has changed/developed since your first release on FXHE?

“Well, as is usually the case I feel like I’m finding my niche more, refining more, etc. but at the same time always thinking about different things to try. I think part of maturing as a producer is being able to zero in on a particular sound / feel you are going for, without it sounding too unrefined and amateurish…”

What’s next? Are you working on new material?

“Only the future can tell…I’ve been throwing around the idea of starting my own imprint. I’m always working on new material. Music is my release, not my job, so for me it’s a way to channel my daily life experiences into art. I can’t say that I’m in the studio every day – that would just be bad. I need to take breaks, respect my creative energy. Since I finished Future Thought I probably have enough new material to do another full length, but I don’t want to release everything. I need to have some tricks in my bag when I play out. Stuff to surprise the crowd with. To me, that’s what makes a performance special.”