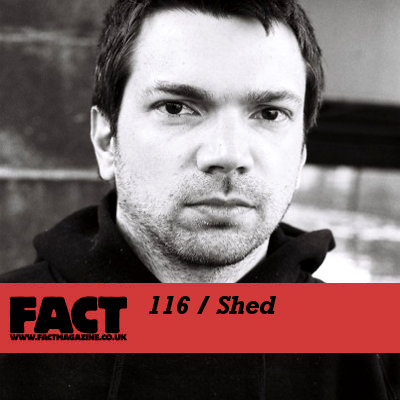 The Berlin-based producer and DJ, real name Rene Pawlowitz, has steadily built a reputation as one of the most consistent and imaginative techno artists of the contemporary era. Despite the adulation, he remains a humble and reserved fellow, one who seems to revel in his outsider status and the freedom it affords – it’s not for nothing that his label, launched in 2004, is called Soloaction.

He’s existed on the periphery of our vision since the mid-noughties, thanks to classic Delsin, Styrax and particularly Soloaction releases like the Looking Back EP and ‘These Kinky Dudes From Germany’, but it was in 2008 that Shed really grabbed us by the nads. First came the remarkable single ‘Warped Mind’, and then his quietly monumental debut album, also released on Ostgut-Ton (home to Marcel Dettmann, Ben Klock et al). Shedding The Past found this producer coming to terms with techno’s charged history while also doing everything in his power to nourish and dictate its future, matching melancholy, serotonin-depleted synth melodies to impeccably swung rhythms derived not just from straight techno but dubstep, garage and hardcore.  Not for nothing was it ranked as one of FACT’s albums of the decade.

Since then, Pawlowitz has become an ever more vital presence in, and agent of, forward-thinking dance music: his remixes for the likes of Peverelist, Substance, Radio Slave and particularly  Taho (‘Energy Fields’) have been genuinely adventurous while also sating the demands of the dancefloor, and his two ongoing, “anonymous” 12″ series, Equalized and Wax – both distributed by the Hardwax store where he works – are remarkable for their elegant subversion of modern techno’s rhythmic givens. And for just being, well, lip-bitingly brilliant.

In summary, and in case it’s not obvious by this point, we love Shed; in fact, when he first floated the idea of recording a FACT Mix we had to have a gin-and-tonic and a lie-down before responding. The mix reflects its makers ongoing interest in dubstep and post-garage forms, with tracks from the likes of Peverelist, Martyn, Joy Orbison, Zomby and Skream (the oft-overlooked ‘One For The Heads’) enjoying prominence, but that’s just one strand of a diverse and hugely rewarding selection: look out for hard and raw techno from Surgeon and Underground Resistance, deadly warehouse minimalism from Pan Sonic and Marcel Dettmann, and out-and-out rave anthems from Aphex Twin, Drexciya and Link. Full tracklist over the page.