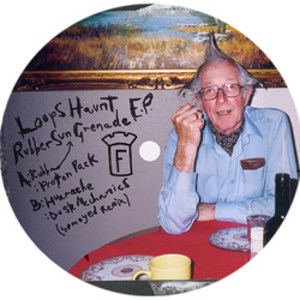 Since its rise from the underground inspired a generation of bedroom producers to get generic, the over-saturated dubstep scene continues to divide. Fracturing into a hazy spectrum of various splinter groups, you can’t help but wonder if it these disparate factions will ever reunite. A good thing then that we have releases like this one to reassure us that really, it doesn’t need to.

With the intimidating lope of hostility merchants Milanese or Vex’d continuing in B-Side opener ‘Huarache’, Loops Haunt is proving himself a proponent of a more subtle aggression than many of his peers. While its cold, jagged electronics are hardly an easy listen, what the track lacks in warmth is more than compensated for by its meaty swagger.

Comparably, ‘Proton Pack’ is one of the less intense cuts on the release, more an exercise in rhythmic futurism than muscle-flexing swagger. That familiar 140 bpm kick-snare pattern is dubstep in its bare bones, but save for rumbling bass hits, the track is far more involved in its scattered of SNES cartridge 8-bit polyphony.

Closing the EP is Samoyed’s remix of ‘Dusk Mechanics’. Washed thick with static-grainy pads and whip-crack white-noise snares, its tumbling groove gradually breaks through the track’s crackling melancholic haze before submerging once again. Its lo-fi, crackling timbre make Burial comparisons all the more tempting, but the sort of distorted summery woe exhibited here deserves recognition in its own right.

A release of impressive depth and technical virtuosity, Loops Haunts’ debut marks him as a producer with the potential to match his more established Glaswegian peers in the LuckyMe camp.