Late of the Pier: ‘Blueberry’ 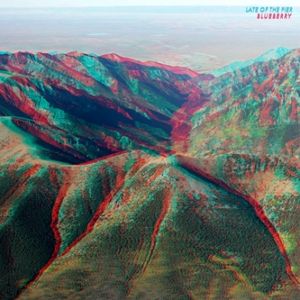 “I hate to dissuade people, but it’s not going to sound any different when it’s mastered. Because a good mastering person doesn’t affect the way the record sounds.”
– Bradford Cox, 2008

Maybe it comes from me mostly being around music fans who approach pop music from a dance perspective, but people can get too caught up in production. Yes, the xx benefit from the space to groove that Jamie Smith’s bottom-heavy grayscale grants them, but without adequate songwriting to fill that space they’d be shown up.

Likewise Late of the Pier. Their last album, a minor classic in 2008’s Fantasy Black Channel, was produced by Erol Alkan, and benefitted immensely from his sharp, neon-tinged approach. But the stars of Fantasy Black from beginning to end were Late of the Pier themselves: the album succeeded on the merit of its choruses and bridges before it did its atmosphere.

It’s weird then, that ‘Blueberry’, at times Late of the Pier’s most stripped down song, er, ever, leaves you wanting so much more. That’s not to say it’s low fidelity; the track opens in a burst of sunlight through shutters, and Samuel Dust’s vocals on the chorus are turned a deep shade of blue by its overcast synthlines. But the first verse opening with just Dust and an acoustic guitar, and featuring some of the band’s most literal lyrics to date (“Sunday morning comes and I look out my window to the clouds / and through the rain I feel the love that shines on everyone around”)? A backing choir on the chorus? It’s not like this is what Late of the Pier have ever been against – they did officially bring glam rock back on ‘Focker’, remember – but it’s just doesn’t sound good.

By the time that guitar solo hits – basically tacked on at the end – it’s just got a bit embarrassing. A shame, as Late of the Pier are hugely talented, and them becoming more confident in their ability as a band is something that should never be discouraged, but when new bands like Cold Cave and retrospectives like Stones Throw’s Minimal Wave Tapes alike are displaying simply how twisted synth-pop can get, ‘Blueberry’ feels shamefully traditional in comparison.