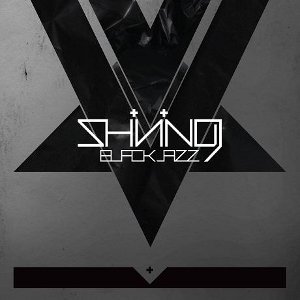 Recent Shining single ‘Fisheye’ was initially showcased on Norwegian TV, and seemed uncharacteristically violent for the Oslo quintet. Granted, they changed completely from the reasonably polite sax-led jazz of Sweet Shanghai Devil (2003) to the epic, soundtrack-inspired In the Kingdom of Kitsch You Will Be A Monster in just two years. But there was still jazz, if viewed through a Tortoise-shaped kaleidoscope, at the heart of both that and the group’s best album Grindstone (2007). Even shouted vocals were performed in a playful group manner, and no ill was meant by heavy rock passages. ‘Fisheye’, though, was different. Here was hewn-from-granite groove riffing, FX-drenched snarls, and blast sections. It was exhilarating and brutal. And a mere hint of what the new record, Blackjazz, has in store.

Grindstone hinted at heavy metal thunder in places, but that metamorphosis seems to have completed in convincing fashion on Blackjazz. As the title implies, the musical freedom, technical acumen (and sax) of the band’s jazz past remain, but the sound has been fortified infinitely with the sheen of an effortlessly futuristic form of metal. This isn’t the knowing wink of a Fucking Champs or The Sword: it’s an honest, revitalising take on the genre from a band who understands both its past and its possibilities. Beginning as it means to go on, Blackjazz opens with ‘The Madness and the Damage Done’, bearing little overt resemblance to Neil Young, as it races out of the traps with the confident power that characterised Slayer’s ‘Angel of Death’ or Soundgarden’s ‘Rusty Cage’.

Following ‘Fisheye’ is a brace of songs called ‘Exit Sun’; one a semi-epic death race along a track designed by M.C. Escher, the other a brief coda. The former, once it hits full throttle, rewrites ‘Army of Me’ as if Björk were a group of leather-clad Norwegians, before slipping with ease into the kind of shifting, false-footing riff-as-riddle on which Meshuggah have built a career. ‘HEALTER SKELTER’ takes the bare-bones sax sketch of Kingdom of Kitch…‘s ‘REDRUM’ into this dark new world, symbolising the journey the band has taken in the last few years. The melody grows, as the band has, quite comfortably into its current aesthetic. During songs like this, the riffs are so catchy that they recall prime White Zombie; they’re just nestled within far more complex arrangement.

‘The Madness and the Damage Done’ returns, midway through the album, with a violin sample so disquieting it could have been on Venetian Snares’ Rossz Csillag Alatt Született opus. The theme of growth, of evolution, continues with this track, as the violin is replaced by the full band, still faithful to that initial melody. Revelling in the sound, the noise grows: as its crescendo tops out, you get the feeling the structure of the song couldn’t handle its own intensity. As the sound of electromechanical malfunction sputters into the mix, visions of cabling lashing out like PCP-addled cobras, spitting sparks like venom, we are aware the song was consumed from within by what is to follow, overwhelmed by the focal point of the record.

‘Blackjazz Deathtrance’ is an eleven-minute mindfuck of the highest degree. A song of massive dimensions, it takes nearly three minutes to even get going, barrel-rolling drum fills doing their best to jump-start guitars, idling menacingly. With a scream, it begins. Future-world vikings tear strips off each other as a sampled audiences loses its collective mind in a reality show bloodlust frenzy. It’s The Running Man 2K10, with fittingly frantic music backing the violence. But the shred isn’t coming from guitars. It’s coming from… distorted bass? Satan’s synthesizer? While countless bands have married rock with electronics, few have done so sufficiently seamlessly that it doesn’t matter to the listener from where the sounds emanate. The mix is so dense, so armed with weapons of sonic warfare, that it – like the preceding song – eventually can’t take the strain. The malfunction takes hold once more; the song bides its time as it readies its return unto the breach. It begins again, with more velocity than before, taking in rave melody lines, blast beats and noise, building cyclically into an orgy of noise before consuming itself.

A brief passage of silence represents the cut-off point of the excess. Considering not much could follow ‘Deathtrance’, Shining opt to use ‘Omen’ retroactively; a reflection on what has passed. The tempo drops sharply, with the metallic sonatas still fresh in the memory. This is where the Sin City soundtrack-sax of old returns, roaming safe in the knowledge that the brutality has exited, leaving only charred remains. ‘Omen’s a fittingly elegiac counterpoint to the frenzy that preceded, rather like the title track of Converge’s Jane Doe, or Strife’s untitled conclusion to In This Defiance. This is the album’s real denouement, though we do get an epilogue King Crimson cover, ’21st Century Schizoid Man’. It’s a fantastic rendition, re-writing the classic in Shining’s dehumanised image, while paying due respect. But, after the overdose of original, impeccably modern music, its inclusion may be considered a step too far. Especially considering how well ‘Omen’ ostensibly finished things.

That display of musical opulence aside, Blackjazz is a pretty vital piece of work. Though some quarters of the metal audience may balk at the absence of 20-minute drone-backed monologues, and the presence of no small amount of testosterone, it’s been a long time since a metal album sounded so of its time. At points its gleaming, reflective surfaces may reflect other artists, though taken as a whole it sounds like nothing else. The shape of metal to come? Don’t count on it. We should just be thankful Blackjazz exists in the here and now. If Tool or Trent Reznor were capable of this kind of thing in 2010, it would sell hand over fist. As it is, Blackjazz may just have to settle for cult classic status.