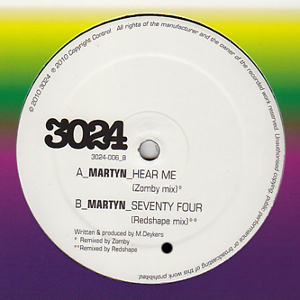 Zomby may be best known for his original material, but his ability to remix a track and flip it entirely on its head should never be neglected. Last year’s ‘Summertime Clothes’ by Animal Collective was a song that relied on its propulsive chorus; a hook driven by what sound like pitchshifted handclaps, designed to subtly sweep you away. Zomby’s Analog Lego remix of it was propulsive, but in an overly deliberate, almost limping way: the track’s blocky leadline sounds like it’s clumsily struggling to reach its intended destination, like a Slinky toy being forced to push itself upstairs rather than down. Crucially, it’s a track that propels itself, rather than its listener – appealing for the opposite reasons of its original.

Here he takes on ‘Hear Me’, from Dutchman Martyn’s Great Lengths album. The music is typically precise, its highs glistening as if viewed by a rotating camera, recalling his recent ‘Aquarium’ (recently made private on YouTube), and with that classic Zomby melodic trait of being almost magically simple on the surface, but complex and multi-layered in reality. But where this remix really excels is the way it treats the original’s vocal.

On Martyn’s original track, sporadic cries of “hear me”, “you can hear me” and “can’t you hear me” (but mostly the first of the three) dart around a dusk-shot 2step rhythm. Zomby makes the vocal the track’s focus, only using the “can’t you hear me”, and stretching it out (“can’t – you – hear – me?” – demanding that question mark) in a way that makes it sound frustrated and trapped, like a voice coming from some contorted hinterland between dimensions. In Zomby’s hands, ‘Hear Me”s vocal sample becomes its protagonist.