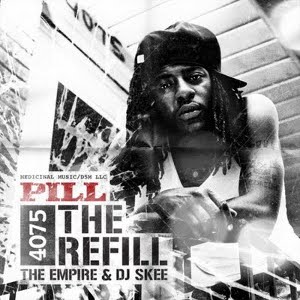 Perhaps Atlanta rapper Pill doesn’t need to worry about making a full length. His latest mixtape, 4075: The Refill, plays like a full-fledged album: the sequencing is brilliant, a majority of the beats are originals and the verses not written exclusively in the studio (and if they were, wow). Refill rolls deep at a marathon 24 tracks, but rather than feature filler, it’s simply too deep to be fully absorbed in one sitting, pulling you in for multiple listens and always offering more.

The tape starts hard and continues to bust heads for the remaining 72 minutes. The first four tracks are all steel-toed productions (especially ‘Trap Goin Ham’) that provide a showcase for Pill’s bars as well as a great jump off for the darker ‘Pain in they Eyes’, which effectively accomplishes in musical form what The Wire did for television: using personal stories, Pill here paints a picture of slum life in painfully clear colours. A straight forward narrative style combined with exceptional rhyme skills gives him the power to preserve the reality of these images without needing to resort to stale emotional explanation. He’s able to succeed at that role many rappers fail at: MC as true and unabashed street reporter (Nas and Mobb Deep also succeeded at times), demanding active participation and unfailing attention – this isn’t material to get comfortable to.

‘Glass’ follows ‘Pain in they Eyes’ on a similarly vivid street kick, albeit augmented with an extra dose of theatrics. An ominous instrumental by the Beatchefs with choir samples and glass breaking samples filling in for snares provides a sharper backing for Pill’s graceful verbal stride. The chorus is simply street banter and urban found sound, creating a sort of musique concrete take on rap that compliments Pill’s detailing of the workings of the daily corner trap. Following ‘Glass’ is the gangster horror film perfection of ‘Run up to Me’ that I already reviewed here.

Once The Refill reaches ‘Super Cool’ there’s a sudden change in tone – along with ‘You’re Nasty’, it provides a semi-legitimate moment of comic relief and club appeal. Yet these tracks are also proof of young Pill’s versatility. The club zone quickly fades, and ‘All I Can Say’ marks a dreary yet soulful strut back into the tales of Pill’s neighborhood. ‘Coastin’ meanwhile is a light-headed ride through Atlanta’s humid night zones, aided by an ethereal instrumental by Mick Vegas. Mick deserves more attention, and if he keeps up magic like this – a rarity of a track that conjures images of ghosts and levitating Cadillacs in equal measure – he’ll surely get it.

Some would say that every masterpiece must have a flaw, and ‘Trap Jumpin’ is the only throwaway track on this otherwise impeccable document. Thankfully two solid collaborations follow it: ‘We Outside’ with Alley Boy a classic dirty south fighting song (breath samples included), and the bouncy banger ‘Born with a Plug’ featuring another sharp, upcoming rapper, Zay Cash. Pill toasts the beat and Zay spreads drawl like margarine.

4075 ends with a well-placed ending piece. ‘We Don’t Even Know’ acts as a summary of the preceding 24 tracks, Pill once again using his matter-of-fact delivery to explain his situation on the closer’s chorus. “We don’t even know who we are / When we’re on this corner serving cocaine” – maybe it’s just that this line comes at the end of the tape but it seems to stand out amongst others.  This line says a lot about Pill, and even the state of rap. Thug exploitation rappers often fail to understand their situation, offering us nothingness over rhythm, but Pill grasps the ungraspable, exploring this situation while offering no answers or melodramatic explanations. Few can boat both strength and street smarts without ending up in the over-emotional zone; Pill can.