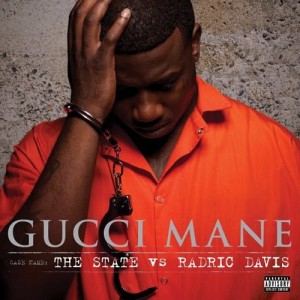 As far as hip-hop superstars-in-waiting go, Gucci Mane is at first glance an unlikely fit for the role. T.I. has his Hollywood looks, Lil’ Wayne is a cartoon come to life, but Gucci Mane seems almost too much like a real person to be a hip-hop hero. He comes across as resolutely unglamorous despite the frequency with which he muses on his diamonds, an average pot-bellied joe schmoe with a penchant for getting blazed. His laconic, heavily-accented flow is undemonstrative and almost conversational; he has a habit of slurring his words to the point of incomprehensibility, while his periodic trademark “burr!” exclamations are less imperial imprimatur, more stoner grunt. But his ostensible slothfulness doesn’t just bely Gucci Mane’s talents – it is part and parcel of his appeal. A gifted lyricist with an ear for a seemingly unending stream of head-turning metaphors, Gucci Mane doesn’t so much bounce between images as casually stroll from scene to scene, the backdrop shifting behind him all the time; it’s apt that he named a series of mixtapes The Movie.

The State vs. Radric Davis is just his second official album, following 2007’s Back To The Trap House, but the intervening period has seen Gucci Mane’s prolificity go into overdrive: guest spots, remixes, unofficial albums and an avalanche of mixtapes (those collaborations are increasingly high-profile, with his remix of Mariah Carey’s ‘Obsessed’ being singled out by none other than Jackie Collins for praise on Twitter). As hip-hop blogger Noz has pointed out, 2009 saw Gucci Mane release more material in just one month than A Tribe Called Quest did in their entire career; the most prolific spell saw him drop the thoroughly excellent Movie 3-D: The Burrprint mixtape, the collection which remains the best summation of the Gucci Mane persona, and less than four weeks later follow it up with a concept triple-mixtape – to repeat, a concept triple-mixtape– entitled The Cold War, divided into Guccimerica, Great BRRRitain and BRRRussia.

The news of a 20-track major label album on top of this could be cause for unease; can a man who’s thrived in the casual, no-pressure world of mixtapes released as and when he feels like it have enough genius left over for a mainstream format? One’s trepidation is only compounded by the lead single, ‘Spotlight’, a disaster of Eurocheese beats and cut-and-pasted Usher chorus, which Gucci wears like an ill-fitting fake designer suit. Nothing is good about it; if The State vs. Radric Davis aims to showcase versatility beyond his mixtape audience, ‘Spotlight’ suggests failure.

Luckily, it is a red herring. The album opens Gucci Mane in startlingly focused mode, his rarely-used doubletime working overtime on ‘Classical’ (“Gucci Mane the dapper don, capper like a Capricorn”), backed by an unabashedly worshipful choir. Barely pausing for breath, he moves from the church to the club on ‘Heavy’ (“I change cars like a rich white girl change shoes”), which bangs like a motherfucker and at no point lets up. The beat of ‘Stupid Wild’ twists and turns like a carnivorous worm; it’s so sick that Gucci, Lil’ Wayne and Cam’ron could be saying anything over it (and on closer inspection, they pretty much are, and it doesn’t matter in the slightest).

‘I Think I’m In Love reaffirms Gucci’s ability to carry off the slow R&B-inflected jam; Jason Caesar’s cut-up falsetto shadow-dances with the staccato beat as Gucci matter-of-factly declares, “I’m an entertainer baby but my name ain’t Cedric / I got cheddar, et cetera, so stop the rhetoric.” A plinking piano, wandering bassline and chorus of stoned schoolkids is the backdrop for Gucci, his flow at its most reptilian, to get captivatingly monomaniacal on ‘Lemonade’ (“Jewellery box a lemon bin, my earring size an apricot”). ‘The Movie’ swaggers with burnished confidence, Gucci at his most Gucci: “I’m sorry that I cussed you, baby girl you’re gorgeous / Psych! You’re not gorgeous, but your ass is enormous / And if you never call me, I’ll be rich regardless.” And 15 tracks in, ‘Gingerbread Man’ provides possibly the album’s best opening verse: Jeffrey Dahmer rhymed with Sinéad O’Connor, President Obama and Ferragamo, musings on what Stevie Wonder wonders, and the line: “Sarcasm: these bitches need to ride ’em while I pass ’em / I wouldn’t even give that bitch an orgasm.”

The State vs. Radric Davis does what it sets out to do. Gucci Mane fans won’t feel shortchanged – though they may perhaps be feeling the need to invest in a new hard drive by now – but it’s also a worthwhile introduction to Gucci for newcomers. Nonetheless, it’s not quite as momentous as it perhaps should be; it feels like (just) another excellent Gucci mixtape, and haven’t we had five of those this year already? As high as its quality is, there’s no obvious ‘A Milli’ here, the cross-boundary hit that turned Lil’ Wayne from the most popular rapper in the USA into a pop culture phenomenon when he was in a similar position back in 2008; one feels that Gucci Mane’s gold is as likely to turn up as a random leak or buried on a free mixtape. It’s frustrating, as is his current 12-month jail sentence for probation violation – but possibly, this is the price of following someone who, in his own words, spits genius “erratically, sporadically, fatality”.