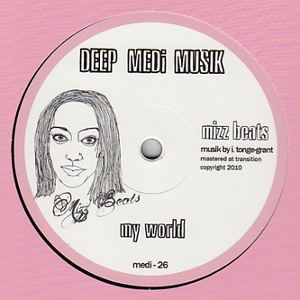 After being partially responsible for one of the best dubstep tracks of 2009, the soulful ‘Purple Love’ co-produced with fellow crew member and label mate Silkie, Mizz Beats returns with ‘My World’, her debut 12” for Digital Mystik Mala’s Deep Medi label.

Part of West London’s Anti-Social Entertainment collective, this may be Mizz Beats’ first solo single, but she’s by no means a new producer. Coming through in what was arguably grime’s creative peak in 2005, she’s written and produced tracks for Wiley, Dizzee Rascal and D Double E, and was responsible for the massive, handclap-heavy remix of Lady Sovereign’s ‘Hoodie’.

A-side ‘My World’ is a mirage of twisted drums and carefully considered synths, half-stepping over a melodic, syrup-think bassline, while ‘B-side ‘The Jester’ goes harder; an addictive 8-bit whirlwind that drools out melodies with the sort of effervescent, soulful tinge that we already associate with the Anti-Social Entertainment camp due to past work from Silkie and Quest. Hopefully the start of a more prolific career for one of London’s most overlooked producers of recent times.