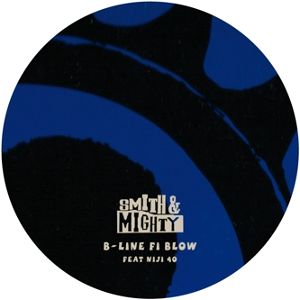 Whether making dubstep under his RSD guise or dub-heavy soundsystem garage on this 2002 classic with Ray Mighty and Peter Rose (reissued and remastered this week as part of Punch Drunk Records’ Unearthed series), the constant with Rob Smith’s music past and present is bass.

Refreshingly, but appropriately for someone so immersed in both traditional dub and Bristol’s unique low-end lineage, Smith’s bass is an organic, almost woodland force – witness how, on ‘B Line fi Blow’, he bends, tightens and loosens the frequency of the track’s bassline until it reaches subtly disorientating proportions. A far cry from the groggy, metallic bottom-end of a lot of what’s popular in modern dubstep then, though there are links to be drawn – it’s interesting how similar ‘B Line fi Blow’s carrion rave squeals sound to noises from Skream’s early Skreamizm double-packs.

That’s before getting into a classic vocal performance from MC Niji 40, a man who only appears to have really featured on tracks by Rob Smith, either with Smith and Mighty or More Rockers, but who steals the show here. From that first “bless-ed – straight up” to rhyming “16 track” with “almanac”, it’s a performance that should be way more iconic than it actually is. “Man inna trousers and girls inna frock”? Give this man an OBE.