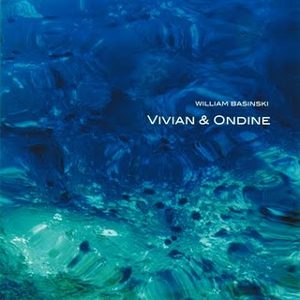 William Basinski’s chief artistic concern is the decay that time wreaks upon music and memory, but also the possibility of redemption and rebirth inherent in the process. In his own words, he’s all about “transformation”.

His most famous work, The Disintegration Loops, was a eulogy, but his new “album” is quite the opposite – it’s an invitation to birth. Vivian & Ondine, a single 45-minute piece, came into being when Basinski’s sister-in-law was heavily pregnant. The as yet unborn baby, already named Vivian, was overdue, and Basinski decided to compose a piece to help “coax her to come on out” into the world. At the core of a track is a typically grave melodic loop – it sounds like a submerged orchestra but is presumably a heavily-reverbed synthesizer – iterated again and again, with ancillary loops then brought imperceptibly in and out of the mix, minutely altering the flow of sound. It feels intricate and alive.

Emotionally speaking, the music yields different responses at different times. It’s a cliche that death begins at the moment of birth, but it’s one that Vivian & Ondine affirms with elegance and poignancy; for all the amniotic warmth of the piece, a sad, funereal fog hangs heavy over proceedings. This is a work which celebrates new life, but is also burdened with the knowledge that all life must, at some point, end. As ever, what makes Basinski’s serene and stately music so affecting is the sheer scope of its subject: if you take “ambient” to mean unassuming background sound then it’s an unfit term for Vivian & Ondine.

The album is a less broad demonstration of Basinski’s talent than last year’s rheumy-eyed meditation on youth, 92982, but it’s somehow deeper and more engaging. Expectant newcomers might find themselves a little underwhelmed – Vivian & Ondine sure isn’t a showboating exercise – but open and patient minds will quickly grasp its magnificence.