On February 23, Stones Throw will release Miles Away, a new album from The Last Electro Acoustic Space Jazz and Percussion Ensemble, yet another alias of Madlib.

The prolific Californian producer has already been busy this year; news of Miles Away arrives only five days after the release of another new album, Madlib Medicine Show Vol.1: The Verdict. On a different tip to his usual blunted hip-hop fare, the work of Last Electro Acoustic Space Jazz and Percussion Ensemble (let’s call it TLEASJAPE from here on in) is an ongoing homage to the golden age of fusion, and it evolved out of ‘Lib’s first conceptual jazz project, Yesterday’s New Quintet.

As Yesterdays New Quintet dissolved in 2007 the “collective” was expanded under the name Yesterdays Universe, out of which TLEASJAPE became the first to release music in the form of 2007’s Summer Suite. 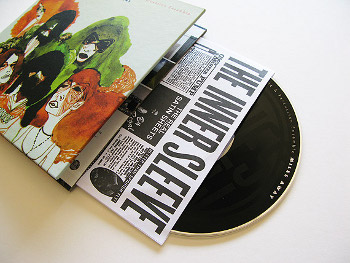 Tracklist:
1. Derf (for Derf Reklaw)
2. One For The Monica Lingas Band
3. Horace (for Horace Tapscott)
4. Waltz For Woody (for Woody Shaw)
5. Shades of Phil (for Phil Ranelin)
6. Black Renaissance (for Harry Whitaker)
7. Tones For Larry Young
8. Mystic Voyage (for Roy Ayers)
9. Two Stroeis For Dwight (for Dwight Tribble)
10. The Trane & The Pharoah (for John Coltrane)