It was only a matter of time, really. The Magnetic Fields’ 1999 album 69 Love Songs is being reissued as a deluxe vinyl boxset.

The ’99 release was spread over three CDs, with the Fields’ frontman Stephen Merritt – inspired by a visit to a gay piano bar in midtown Manhattan – employing a massive range of stylistic and lyrical modes in order to achieve his bonkers aim of presenting, yes, 69 original love songs. A decade on, its sheer conceptual gumption is still astounding. If ever there was an album that deserved a massively impractical vinyl pressing, it’s 69 Love Songs. 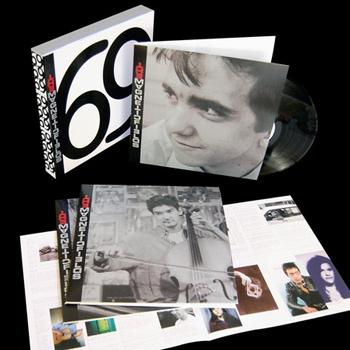 Merge appear to have put considerable effort into the limited edition box set, having remastered all the songs and pressed them on six 10″ vinyl records which are housed in a super-sized 69 Love Songs box, along with a 10″ version of the original booklet featuring liner notes written by Lemony Snicket author Daniel Handler. The box set also contains a download coupon for the full remastered album download.

It’s available to order for $89.98 directly from Merge, with a shipping date of April 20; pre-orders get a $10 discount and a printable e-Valentine card.

Magnetic Fields – ‘I Don’t Want To Get Over You’