Over to Jonny Trunk to fill you in on his latest find:

‘Over the last few years intrepid music lovers have been investigating and enjoying the work of pioneering electronic musicians, electro-acoustic artists and all the groovy folks who spent hours manipulating and cutting tape to make new and exciting sounds. But one of the most important, innovatve, influential and almost forgotten artists of them all is Tristram Cary.

“He hasn’t had that much exposure over the last few years, not much at all considering he is known as ‘the father of electronic music’. Well now his story is here.”

Cary was the son of well-known novelist Joyce Cary, and was born in Oxford in 1925. Following a stint as a radar operator in the Royal Navy during the war, Cary began building an electronic music studio using discarded military equipment; it was the first of its kind in the UK. He began to make a living as a composer, and he wrote the music for the 1955 Ealing movie The Ladykillers.

Cary went on to do a great deal of work for the BBC, creating music and sound effects for the Dr Who Daleks series of 1963. In 1967 he founded the Royal College of Music Electronic Studio and wrote the music for Hammer’s Quatermass and The Pit, shortly before founding EMS with Peter Zinovieff and David Cockerell. EMS was the UK’s first ever synthesizer company, and its products included the VCS 3, the suitcase Synthi and the Delaware – instruments which figures in the music Pink Floyd and Brian Eno among others.

Moving to Australia in 1974,  Cary worked in a range of roles at Adelaide University before returning to composing in 1986. In 1991 he received the Medal of The Order of Australia for services to music.

It’s Time For Tristram Cary is the first British retrospective of the composer’s work; all the recordings are from his archive and the track selections were agreed before his death in 2008. Many of them have never been issued before. 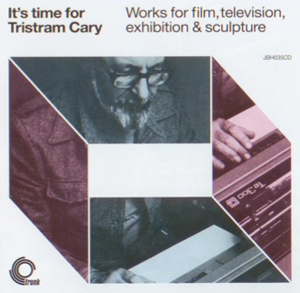