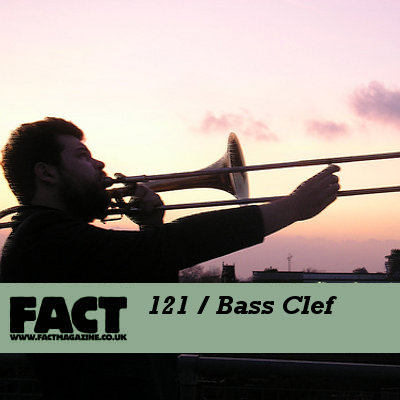 The London-dwelling producer and live performer has earned himself a considerable cult following over the years, first turning heads with his distinctive 2006 debut LP, A Smile Is A Curve That Straightens Most Things – which combined influences from grime, dancehall, dubstep, with an all too rare dose of humour, heartbreak and humanity worked into the equation . The subsequent EPs, Hackney Centralist, Opera and Zamyatin Tapes Vols. 1 and 2, found him refining that mixture to increasingly potent effect, and February 15 sees the release of a new Bass Clef full-length, May The Bridges I Burn Light The Way, via the Blank Tapes label which has been his home since day one.

For his FACT mix, our man – real name Ralph Cumbers – has avoided the kind of British and Jamaican bass sounds that he’s invariably associated with, and chosen instead to showcase some of the African music which has been his private passion for years now. The results are incredible. All the tracks have been ripped from vinyl and specially edited, and it’s not hard to see how they’ve impacted on Cumbers’ productions in terms of mood, rhythm and character.  See over the page for the mix’s tracklist and a few words with its maker.

So tell us about the mix…

“Well it’s some of my favourite african tunes, all vinyl rips, nothing from comps. Some careful editing was necessary, as a lot of these tracks run to 15 minutes plus in their original form, and I wanted to get a lot in! These songs of musical joy were my soundtrack and sanctuary whilst working on Bridges….

What else are you enjoying listening to at the moment?

When did your relationship with African music begin, and how has it evolved over the years? Does it impact on your own approach to music-making?

“Embarrassingly enough it probably started with Graceland, which I got on cassette for christmas when I was about 9 years old…When I worked at [sorely missed record store] Imperial in Bristol all those years ago, I got obsessed with Fela Kuti, who lead me on to King Sunny Ade, my hero, who in turn was the gateway drug to highlife, juju, fuji and all sorts of other goodness!

“All the different rhythms are a constant supply of inspiration, a big ass-shaking and joyous reminder that dance music can be complicated and funky without turning into breakcore or IDM, that you shouldn’t fear the beats between the beats…”

What can we expect from May The Bridges? How does it differ from albums previous?

It’s a continuation and a total break if that makes any sense (no, it doesn’t, I know…). It started as an attempt to capture the live instrumentation and the energy of my touring set, but then snowballed in to something else…I tried to make a whole album, with an arc and a story. I find it really joyous and a celebration of the power of music, but what everyone else will make of it I don’t know.

“Hmm, I guess if I could eloquently explain what I was trying to do – which I evidently can’t! – then I wouldn’t have needed to make the music, so maybe you’ll have to figure it out for yourselves…”

What else have you got planned for 2010?

“Loads of touring, hopefully some vinyl releases before all the oil runs dry, a lot of collaborations…and another album if I can get my shit together. It’s not going to take another three years, I promise…”