Ghost Box present Mind How You Go on vinyl

As previously reported, the acclaimed Ghost Box label will release its first vinyl edition on March 5 – an expanded reissue of The Advisory Circle’s 2006 EP Mind How You Go.

The Advisory Circle is the alter ego of “composer, producer, mastering engineer, vinyl archivist and ornithologist” Jon Brooks, an artist inspired by the world of TV public information films. As well as Mind How You Go, he released the full-length album Other Channels in 2008; it’s one of Ghost Box’s most haunting and musically satisfying releases to date.

Mind How You Go (Revised Edition) features four new tracks: pastoral electronic work-out ‘Seasons’, a “krautrock-inflected” version of the title track ‘Mind How You Go’, and remixes of ‘Osprey’ and ‘And The Cuckoo Comes’ by Seeland and Belbury Poly respectively. The sleeve design is the ever-distinctive work of Julian House.

We’re pleased to hear that this is just the first in a series of occasional vinyl reissues of the Ghost Box back catalogue. According to a press release, each revised edition will feature new tracks, unreleased material or versions of tracks by guest artists.

For more information, and to pre-order the record, visit Ghost Box here. 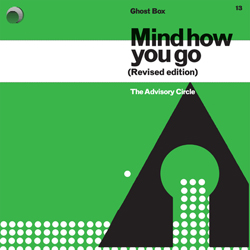 A1. Logo
A2. Mind How You Go Now
A3. Everyday Science (for Ron Geesin)
A4. And The Cuckoo Comes
A5. Osprey
A6. Nuclear Substation

B1. Seasons
B2. Get In The Swim
B3. Nuclear Substation (Public Information Film)
B4. Mind How You Go
B5. Osprey’s Odyssey (by Seeland)
B6. And The Cuckoo Comes to Belbury (by Belbury Poly)