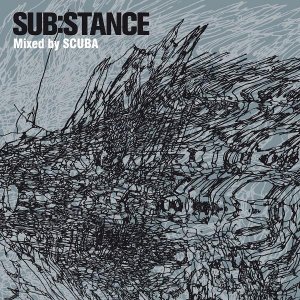 For those with their ears to the (under)ground, it’s impossible to ignore Scuba right now. With a troika of sonic weaponry at his disposal — his label, Hotflush, club night Sub:stance at Berlin’s techno sin palace Berghain, and own, bleeding edge studio creations — his adroit perception of what dance music currently is, and considerable influence, is everywhere to be seen. Arriving just prior to a new artist album Triangulation, which is sure to tip him further into the public’s consciousness and up a notch on the techno ladder, it’s this stunning DJ mix album, named after said club night, that shows his considerable taste and disarming imagination as 2010’s most exciting musical sorcerer.

For those dyed-in-the-wool techno heads yet to be convinced of dubstep’s most futuristic fringes, make no bones: this is the mix to do it. Far from a linear exploration of dubby basslines and chrome-plated, tech rhythms, Sub:stance, and Scuba, manage to grasp all manner of beats ‘n’ pieces, pull them together with an eerie, tentacular grace, and then blast them at your cochleas and dancing feet with a trickster’s sense of fun, excitement, and not a little alchemical mystery.

From the static radio crackles, sonar snaps and smashed glass FX of the half steppin’ ‘Paper Street’ by Airhead, this is a sustained study in deep atmosphere and crucial beats. Working the stop-start, polyrhythmic syncopations of the ‘wot u call it’ set together without missing a beat, Scuba slides from half time to double time shuffles, and achieves a perfect blend between many different tempos and signatures while keeping the funk levels strong.

Cuts from Pangaea, Joy Orbison and Shortstuff capture the zeitgeist; Mount Kimbie’s ‘Maybes’, reworked by James Blake, is a little like Todd Edwards with a melting sampler, Ramadanman and Instra:mental’s cuts are weird future techno and breaks as you always wished it had sounded, respectively; and Shackleton does his spectacularly sinister, dissonant Oriental-tinged thing with ‘It’s Time For Love’. All hugely impressive tunes, and an example of how diverse this increasingly uncategorisable scene has become, for sure. But the real star of the show is Scuba himself, and this impeccably programmed set is his calling card. The perfect companion piece to Triangulation — but that’s a whole other story…