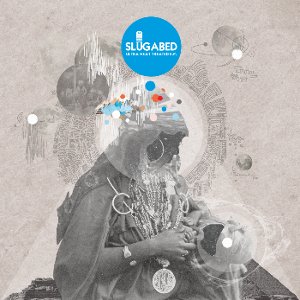 From Sonny Boy Williamson’s ‘Sloppy Drunk Blues’ to Primal Scream’s ‘Higher Than the Sun’; Bob Dylan’s ‘Rainy Day Woman’ to Zomby’s ‘Spliff Dub’, there is a rich tradition in popular song of tracks that not only chronicle overindulgence but actually inspire sensations associated with intoxification in the listener. Taking Drugs to Make Music to Take Drugs to is not just the title of Spacemen 3’s greatest hits compilation: it’s also a pretty succinct articulation of the band’s modus operandi.

Last year, Slugabed’s reworks of Rick James and ODB (neither exactly strangers to inebriation themselves, R.I.P.), sounded so heroically spannered it was hard not to wonder at the state in which the producer responsible for them was in. Now, on Mike Paradinas’ Planet Mu label comes Slugabed’s latest, the six-track Ultra Heat Treated EP.

Far be it from my place to speculate quite which influence(s) the young British producer may have been under when recording these tracks, but there’s no two ways about it; this music sounds absolutely buckled.

From the start of the record, comparisons to Degenerate-era Vex’d and Starkey’s street bass sound spring immediately to mind. The ferocious subs and keening synths of ‘Ultra Heat Treated’ sound barely tethered to a riddim that not so much lurches as hobbles. ‘Skyfire’ pings and whooshes like a mal-functioning arcade, the chopped squarewaves churning like the demented breakdown of Squarepusher’s ‘My Red Hot Car’. The influence of Tom Jenkinson is also audible in the howling synths of ‘Pressure’, which recalls the melancholy motif of 2002’s Do You Know Squarepusher? set against a pistolwhip half-step skank.

The EP continues with the heaving post-Rustie chiptune of ‘Quantum Leap’ and the queasy, K-hole discombobulation of ‘Goulash’, before ‘Titan’ delivers you back towards a vaguely compos mentis, if garishly hypercoloured reality.

Slugabed is a supremely gifted producer. His stop-start synths and crunching, off-kilter beats result in productions that deftly combine melodic sensitivity with satisfying rhythmic complexity. It’s probably safe to expect some big things from Slugabed in the near future, but for now, could someone please pass the Valium?